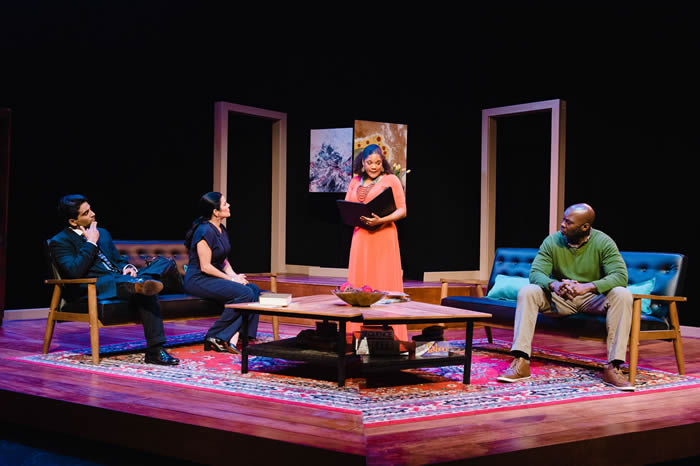 “In the end, we’re all just taller children,” croons Brooklyn-based singer-songwriter Elizabeth Ziman on her band, Elizabeth & The Catapult’s, aptly title 2009 song, “Taller Children.” This is the lyric that immediately sprang to mind as I watched Yasmina Reza’s God of Carnage unspool in front of me at the Keegan Theatre—a finely designed and executed production about the failings of human nature that is occasionally hampered by a somewhat stilted translation of the original text.

Originally written in Reza’s native French, Christopher Hampton’s English translation of God of Carnage was first produced in London in 2008 and on Broadway in 2009, earning the play critical acclaim and Laurence Olivier and Tony awards in the process.

Typical of Reza’s biting humor at the expense of the middle class, God of Carnage centers on two couples (in the original version, they’re Parisians; here, they’ve become Brooklynites) who have come together to make peace after a violent incident between their children on a playground in Cobble Hill Park. What begins as an agreeable enough detente over apple-pear clafoutis and espresso quickly devolves into something much nastier, as you may have guessed from the ominous title of the play. As one character wistfully asks early on in a moment of foreshadowing, “How many parents standing up for their children become infantile themselves?”

The meeting has been convened by Veronica Novak (Lolita Marie), a social justice warrior and writer who is finishing up a book on the genocide in Darfur, and her husband, Michael Novak (DeJeannette Horne), who owns a home goods wholesale business. They’re joined by Annette Raleigh (Susan Marie Rhea), who works in the nonspecific “wealth management” field, and her husband, Alan Raleigh (Vishwas), a high-powered lawyer currently representing a shady pharmaceutical company who’s physically incapable of separating himself from his cell phone.

The topic of their tête-à-tête is a recent playground incident during which the Raleighs’ son hit the Novak’s son in the face with a tree branch, knocking out two of his teeth. Things start out with an air of civility, but as the evening goes on and the Raleighs are unable to extricate themselves from the apartment, human nature, power, and marital dynamics all get called into question.

Director Shirley Serotsky has a deft hand with keeping her actors moving around the space in a way that feels natural and often hilarious. She also does an excellent job building tension and then releasing it—with such a high-pitched, mannered comedy, the tendency to go too big too soon can be tempting, but Serotsky employs the right amount of restraint to allow the show-stopping moments to truly land. The shifting allegiances laid out in the text are made delightfully physical by the actors’ movements around the set.

Similarly, the actors get high marks for how well they embody their characters. Particularly of note is Rhea, whose physicality telegraphs a woman who’s barely containing all the stress and frustration inside her before she even says a word, so that by the time her explosive relief comes, it’s nearly as welcome as it is off-putting. Vishwas plays Alan in the opposite way—he’s cool as a cucumber and a snakelike charmer who gleefully refers to his own son as a savage and lists Spartacus as his role model. Marie, as the high-strung, woke Veronica excellently portrays a woman who’s been holding onto a mask of serenity and politeness and may be ready to tear it all down in spectacular fashion.

Unfortunately, the one thing working against the performances and the direction is the text itself. Hampton—a British playwright, screenwriter, translator and film director—initially translated Reza’s dialog for the West End production and then further tweaked it for American audiences, and was no doubt true to the original. Still, for a casual evening between two couples in a Brooklyn apartment, the language is distractingly heightened. The idea that Michael would refer to himself as a “fucking Neanderthal” just after going on at length about toilet parts to undercut Alan’s snootiness, and then, in the very next breath, refer to his treatment as “intolerable,” “incomprehensible,” and “detestable” strains the audience’s credibility. The audience can easily be taken out of the action as we watch the actors wrestle with making the language sound natural.

To return to a high note, all this madness takes place on a gorgeous set designed by Matthew J. Keenan. What could have been a typical, bland living room set is made more interesting by setting things off at odd angles and not making them match up perfectly—the setting prepares the audience for a schism and plays with multiple perspectives before a single character even enters the space. Liz Gossens Eide’s costumes complement the characters perfectly and offer the director and cast opportunities to create moments of comedy around the taking off and putting on of overcoats and briefcases. Niusha Nawab’s sound design and Katie McCreary’s lighting design are subtle but provide the perfect realistic backdrop upon which some over-the-top bad behavior can unfold.

Even though the play was written more than a decade ago in another country, God of Carnage proves to be a timely and relevant piece of dark comedy that speaks expertly to the present American moment, and Keegan Theatre should be applauded for its thoughtfulness in programming it into this season. When Annette exclaims toward the of the play, “To my mind, there are wrongs on both sides. That’s it. Wrongs on both sides,” and Veronica lectures the room on polite society and the need for vigilance, it’s hard not to draw parallels to our present attempts to live in an increasingly fractured world. God of Carnage may not offer any answers as to how to better coexist as human beings, but it does give us an opportunity to laugh at outsized versions of ourselves… even if it’s mostly to keep ourselves from crying. 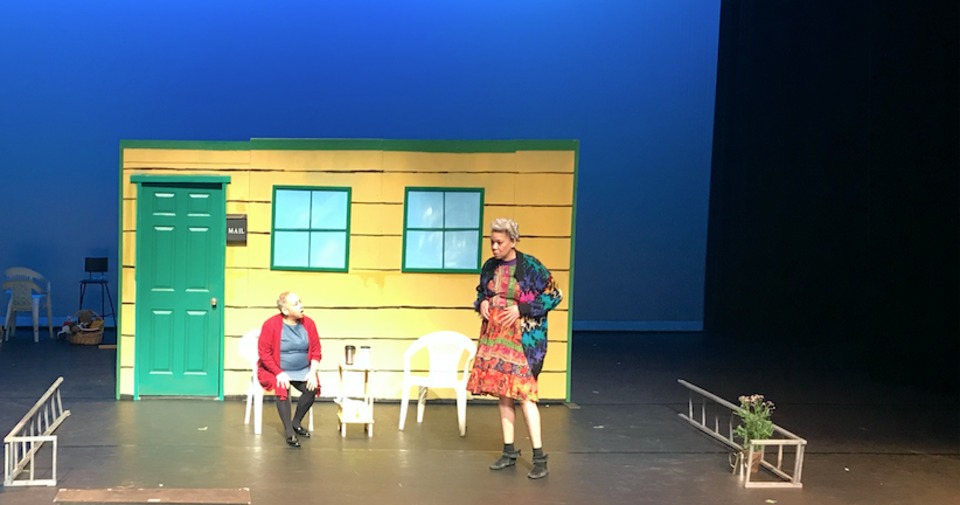 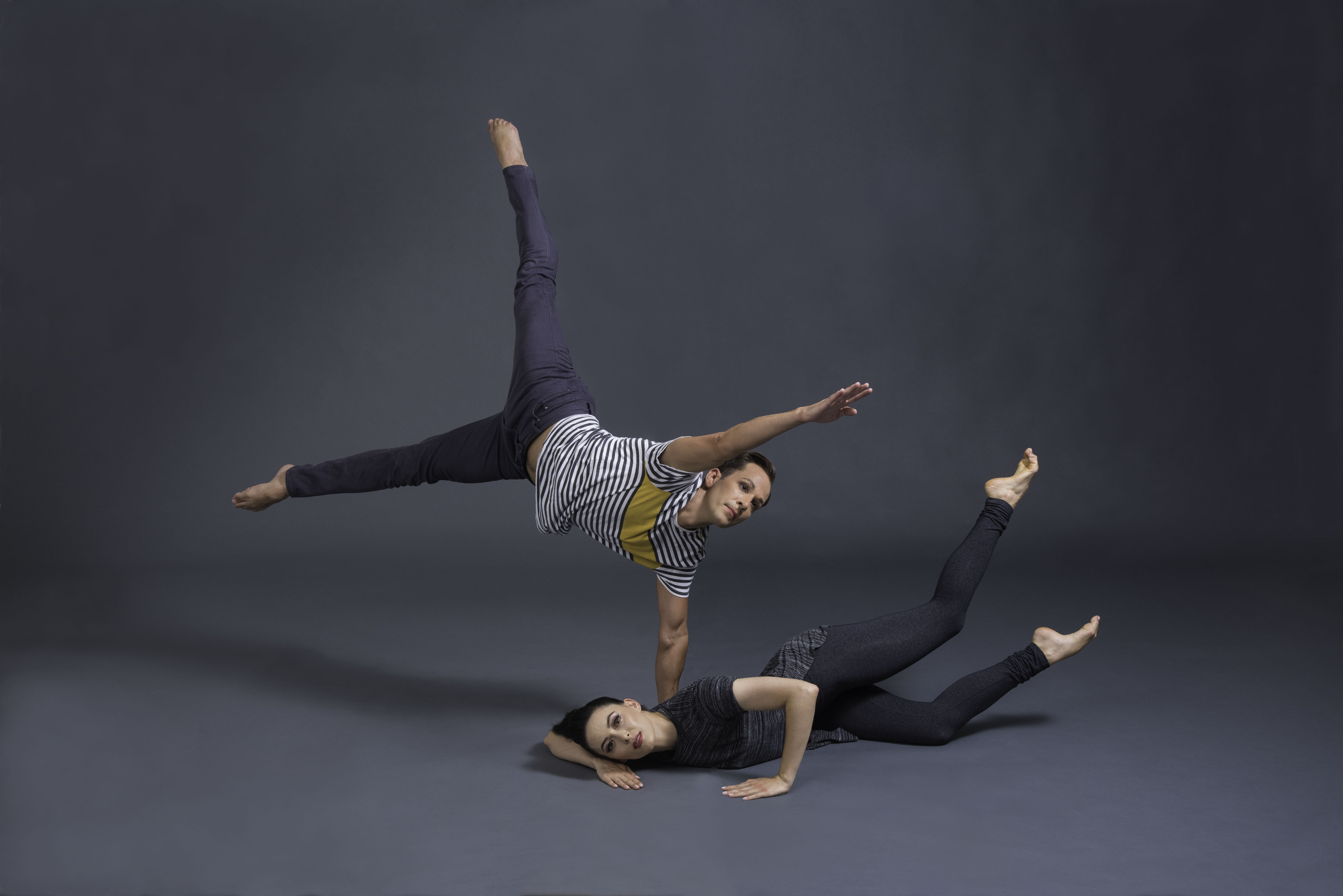