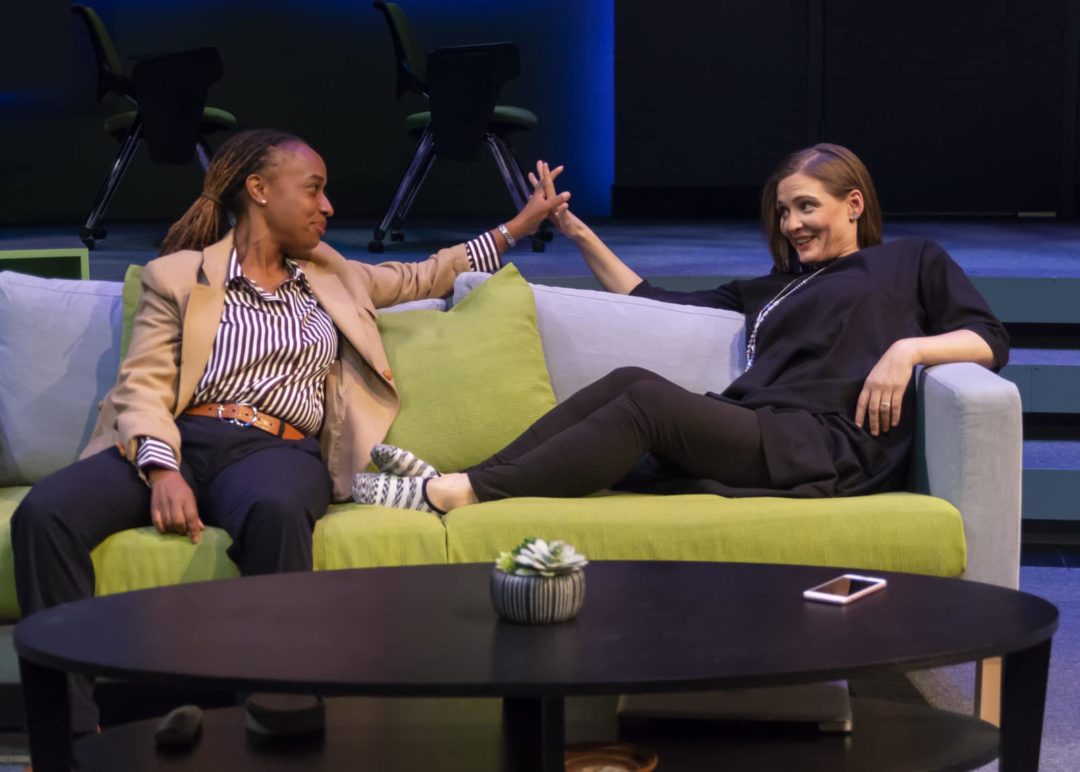 If you were given free rein to say whatever you want about anything you want…how far would you go? And if you were the moderator of that kind of environment, at what point would you interfere? That’s what Norman Yeung explores in Theory, making its American debut at Mosaic Theater Company.

The play was originally written in Canada in 2009, but this story about freedom of speech seamlessly fits in with the culture of American college campuses today – especially the liberal arts universities of D.C. that profess freedom of speech, yet have professors and students who can be hypocritical when people are allowed to give their opinions. It succeeds as a cautionary tale, raising questions of empathy, complicity and the very extreme ends of the political spectrum.

When Isabelle (Musa Gurnis), a tenure-track film studies professor decides to create an unmoderated discussion board for her class, she aims to rile her students up and get them to dismantle the patriarchy, question authority and democratize their studies of the film canon. However, when the posts and videos on the board start to get questionable, offensive, downright abusive, life-threatening and invasive of Isabelle’s privacy, she becomes increasingly paranoid. She must decide if she should intervene, let the assignment play out, or shut down the board. All the while, her students, her wife and the dean of students challenge her.

The story is difficult to take seriously until Isabelle begins to go down the path of obsession. It becomes clear that there’s something else going on here – that it’s a thriller and not just your typical “hot take” on freedom of speech. In the beginning, Isabelle seems like a caricature of a professor, a satire on how professors who profess “freedom of speech” have no idea what they’re talking about. The way that Gurnis carries herself and speaks is so declaratory and self-important sounding that it’s no wonder that her students are resistant. One sitcom-like exchange between her and her students:

“That’s a terrible idea,” one of her students responds.

Until the audience sees Isabelle’s relationship with her wife and understands the dynamics within their interracial marriage, it’s unclear who Isabelle is. Once this relationship begins to play out, you start to understand where she’s coming from and how much this means to her: the idea of giving these students the freedom to think, speak and share their voice when they may never have gotten to share their voice before. Gurnis portrays Isabelle’s idealism with fervent passion and by the dark, intense culmination of it all, succeeds in playing out these emotions in an absolutely captivating, gut-wrenching way.

Andrea Harris Smith plays Isabelle’s wife, Lee, in a way that makes her one of the most human characters of the play. Lee is a black tenured professor and author who’s heard her share of racialized hate speech, and Smith plays this character with just the right mix of coolness and firmness. She’s there for Isabelle at the beginning of the project, but becomes increasingly upset with Isabelle as she refuses to take down extremely offensive comments that began when Isabelle screens clips from “Birth of a Nation.”

The four students that Isabelle is drawn to the most, Josh Adams as Richard, Benairen Kane as Davinder, Camilo Linares as Jorge and Tyasia Velines as Safina, provide youthful voices who challenge Isabelle’s opportunity to challenge authority, which is an interesting dichotomy. They grow and learn to speak their minds in different ways. Some push the envelope a bit too far, like Jorge, and others, like Safina, learn to open their minds and think about films they initially did not want to even think about. Adams takes a star turn towards the end that sent chills down my spine.

A simple set (Daniel Ettinger) gives just enough specifics to establish all three main settings: the classroom, the living room of Isabelle and Lee’s house and Isabelle’s office. The stage is filled with accents of light greens on the chairs, the couch and panel walls, with a splash of orange in Isabelle’s office, as well, to give the illusion of warmth and openness.

The lighting design (Brittany Shemuga) supports this, illuminating the set with five lampshades with singular light bulbs hanging above, creating the constant feeling that they’re in the classroom. One particular lighting scheme that stands out is in the scene in which Isabelle plays one of her most contested film selections from start to finish, as Isabelle stands in a very dark stage with light only on her showing her paranoia.

Dylan Uremovic’s projection design reflects the dizzying, overwhelming effect of technology on the lives of Isabelle and her students; the films seep over from the classroom into Isabelle’s personal life, and display the toll that it takes on her. At one point, as Isabelle texts one of her students, a Bitmoji version of the student’s head pops up, which displays her unrealistic view of what she thinks the students are like.

Another level of anonymity and eerie thrill is added through the sound design (David Lamont Wilson.) As the posts are projected, different voices of the students read off those posts, line by line. You can never tell who is truly who or if they’re reading lines they actually posted. In between scenes, the techno music allows the audience to reflect on the events that have just transpired and adds to the dark vibe.

As a college student of color who is studying media, I highly recommend catching this production, especially to other young people who are having conversations like the ones in this production every day. Theory is a welcome addition to Mosaic’s Season of Awakenings. Prepare to be awakened and shocked and, in Safina’s words, “wake up to the fact that this world sucks – so thank you.” 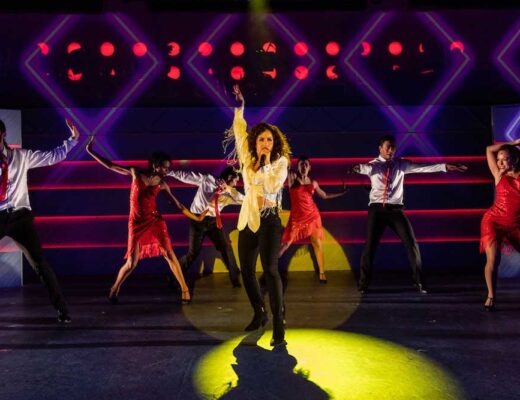 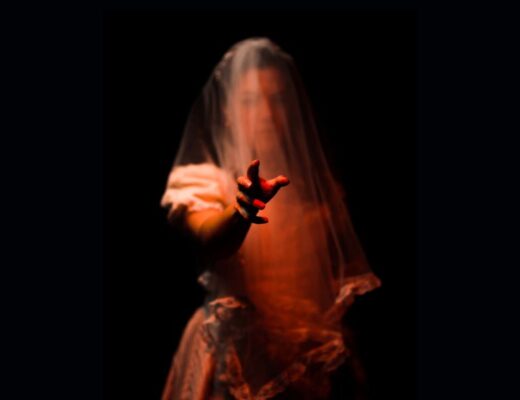