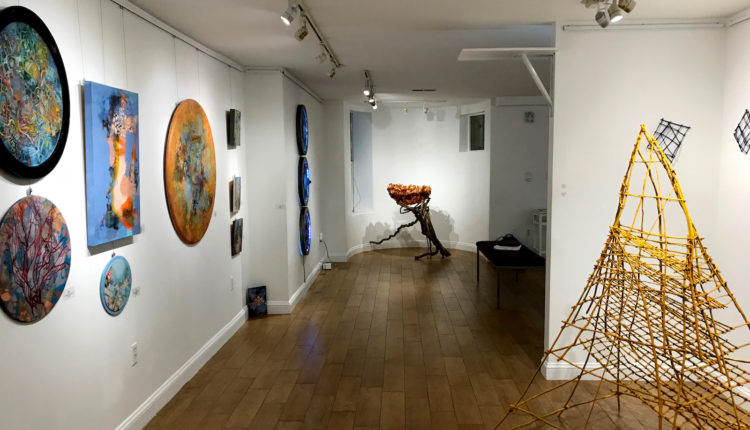 This article was first published January 23, 2020 in The DC Line here.

Two exhibits on display this month at Dupont Circle’s Studio Gallery respond imaginatively to environmental themes, but the featured artists do so through wildly different approaches to aesthetic and ecological concerns.

The Jan. 3 receptions for Lois Kampinsky’s solo show On the Nature of Things and the group exhibition ReClaimed ReUsed RePurposed: Sustainable Art for the Planet were part of the new year’s inaugural First Friday Dupont event, a self-guided art walk around greater Dupont Circle that features stops at several galleries in the neighborhood. A closing reception is set for Saturday afternoon.

Titled after the only known work of the Roman poet Lucretius, On the Nature of Things posits that the natural world has been well-documented already but that, as Kampinsky says in her artist statement, “maybe it’s time to take a playful look, while [the natural world is] still here.” This sense of fun (though seemingly in the face of distress) manifests itself in the vibrant patterns in her paintings from the past few years, which comprise the majority of the exhibit.

Kampinsky’s strengths as an artist shine most in her abstract work. In her “Winglike” series of six 24-inch-by-19-inch gouache paintings, Kampinsky creates compositions that, though inspired by wings, ultimately read as non-representational. Interwoven streaks of color along with triangular shapes could just as easily remind viewers of plants, fish or geological forms. The natural world appears as a stepping-off point for Kampinsky’s more conspicuous artistic preoccupation, the visual relationships between shape and color.

Perhaps this is why her more literal portraits of animals do not feel quite as alive as her abstract paintings. In the large painting “Rabbit,” the flat profile of the titular animal is presented with little personality. The white and faint pale blues of the rabbit’s fur against the painting’s orange, twig-like background do not appeal as much as a color study as Kampinsky’s busier compositions. It is telling that the most visually interesting aspect of another large representational painting, “Bird on Nest,” is, in fact, the nest painted in abstract, tangled streaks of yellows, purples and greens.

Representational subjects function best in Kampinsky’s paintings when animals are presented in large groups, like in her “Jungle Birds” series, where clusters of colorful birds fill up canvases and create a visual pattern. A similar effect occurs in the large canvas “Purple Flowers,” in which a cluster of flowers crowds the composition and appears almost alien nestled in an indistinct dark, moody atmosphere. Kampinsky’s large painting “Bugs” circles back to her self-proclaimed penchant for playfulness with a composition that situates the viewer at ground level among a tangle of vegetation rendered in neon colors and angular shapes. The titular animals peek out from the shadows, rendered in a nearly cartoonish way that leaves their classification uncertain — truly they can only be specified as “bugs.”

Kampinsky’s paintings display the artist’s love of nature in a traditional manner, with the natural world providing a springboard for aesthetic exploration in the familiar medium of painting. This is not the case in the lower level of Studio Gallery, where the production process of pieces included in ReClaimed ReUsed RePurposed more directly engages environmental concerns of sustainability.

As indicated by the title, the artworks in ReClaimed ReUsed RePurposed all explore, to varying degrees, the idea of recycling materials. While Kampinsky introduces playfulness in her paintings through color and shape, the artworks downstairs spark delight in both their aesthetic appeal and their use of unpredictable materials.

One of the first pieces viewers encounter in the basement gallery is Gloria Chapa’s sculpture “CASCARAS (One of 5 Baptismal Fonts)” from 2019. Perched on a twisted base of vines, a large basin seems to shine orange under the gallery lights. With a closer look, one realizes what is contributing to the piece’s translucent glow: The basin is made entirely of onion skins held together by resin. As an inventive reimagination of a commonly overlooked material, Chapa’s installation excels.

Other striking pieces include Erwin Timmers’ contribution “Site Map 2.0,” constructed in 2019 from recycled glass along with reclaimed wood and steel. Timmers casts common detritus like bottle caps, soda cans and foam peanuts into gridded patterns within square glass molds. These glass panels protrude from the wall on steel rods connected to a black, backlit circular mount whose rim illustrates the jagged edge of a continuous skyline. The resulting aesthetic is sleek and urban. Through his artwork, Timmers examines how society consumes and discards resources, prompting the viewer to consider not only the end product of the artwork but its origin and process.

Other artists repurpose industrial materials as well. Sculptor Liz Lescault’s small steel pieces use recycled metal to create intuitive, biomorphic forms. Pat Goslee — who, like Kampinsky, primarily paints — creates her compositions on found objects, mainly discarded tabletops. The results are circular artworks — tondo paintings, to be specific — made of threads of color that feel like anxious vortexes. These entropic compositions reflect the artist’s view of her work as a chance to portray emotion, particularly of worry surrounding environmental distress and disaster.

The pieces of Julia Bloom bring the exhibit back to the realm of natural materials with stick towers inspired by the architecture of nests and thickets and scaffolding. While these free-standing sculptures reference nature through their materials, they are ultimately transformed into something new through the addition of bright primary colors.

Paper artist Jessica Beels, acknowledging that art itself can generate waste, creates collages from the leftover scraps of her past projects. In her compositions, she repurposes paper fragments and creates new handmade paper using discarded denim and other found materials like junk mail, invasive plants and even plastic bags, again calling attention to consumption and the potential of what’s often overlooked or discarded.

If there is one outlier in ReUsed ReClaimed RePurposed, it would be Robin Bell, whose pieces fill the back room of the basement gallery. A video artist known for his site-specific projections installed around DC, Bell takes a more conceptual approach to the question of reuse. (You may remember that Bell was in the news last March when his collaborator was arrested while setting up an installation at the Rayburn House Office Building.)

In effect, Bell recycles his old work. His pieces at Studio Gallery either incorporate elements from earlier installations or are previously created works presented exactly as they were when first made in order to examine how differing temporal and spatial contexts may affect an artwork’s reception and meaning.

Bell’s contribution to the exhibit stands out because it relies on video components whereas the works by other artists are more concerned with tangible materials. His installations also noticeably push environmental and political anxiety to the forefront.

The year 2020 has already witnessed increasing levels of environmental catastrophe — from the ongoing Australian wildfires to the recent earthquake in Puerto Rico — and the world will continue to face the dangers of rising global temperatures and augmented natural disasters. The fanciful paintings of Kampinsky and the inventive installations in ReClaimed ReUsed RePurposed touch on these concerns, but often relegate the sense of dread surrounding environmental issues to the periphery in works that initially present as aesthetically appealing and fun. In contrast, a work like Bell’s “Death comes from the top, resistance comes from the bottom,” dated 2019/2020, forces viewers to confront current circumstances and, literally, themselves.

In “Death comes from the top,” the viewer stands in front of a full-length mirror over which hangs a small TV screen. The monitor plays a looped video in which the camera zooms out to reveal a kitschy metallic skull wearing a red cap with the phrase “THIS IS NOT NORMAL” stitched to the front. The politically charged message paired with the skull comprises a contemporary memento mori easily applicable to current environmental circumstances. The inclusion of a mirror that makes viewers face themselves then provokes the question of what we can and should do in these atypical times. The question can expand to encompass the entire gallery: During alarming times, in what ways may artists react or resist? 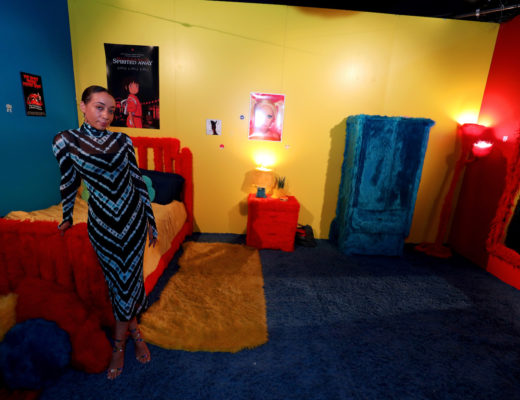 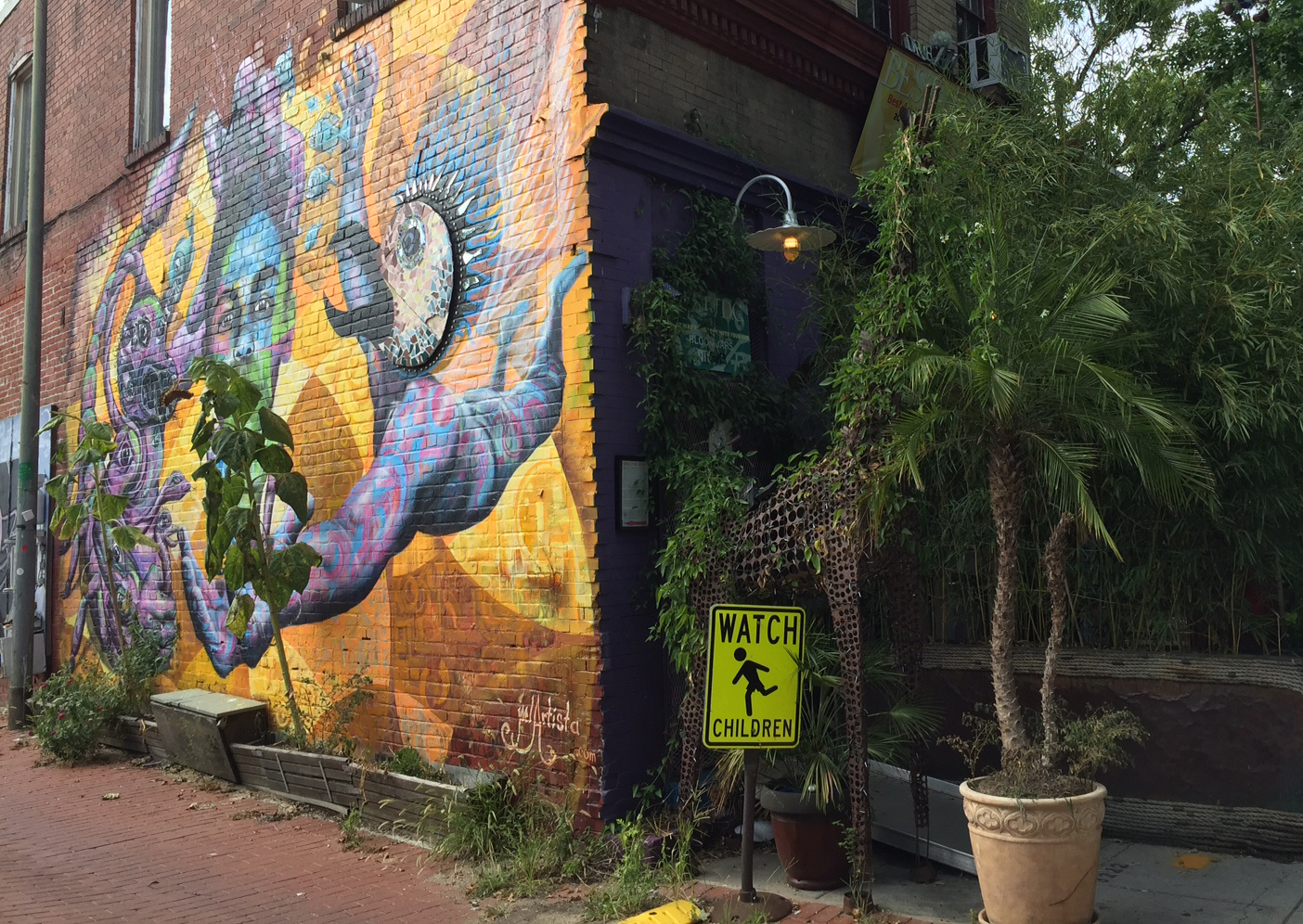