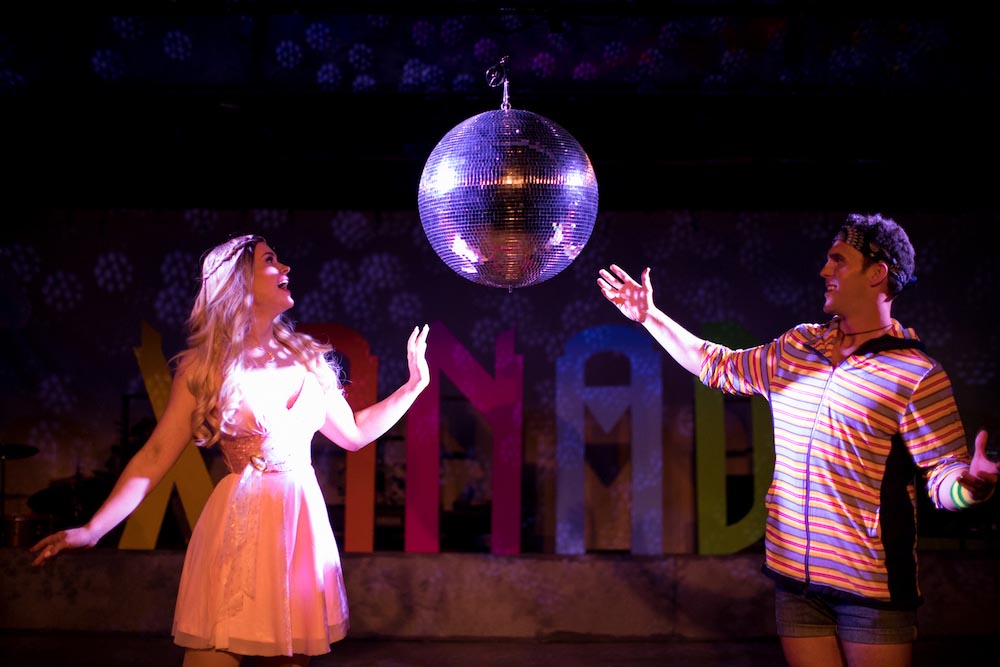 Campy in the best way possible, Xanadu is a goofy and lighthearted yet strangely heartwarming tale that pushes the boundaries of how much an audience is willing to suspend disbelief amidst bursts of laughter.

Xanadu, a Tony-nominated musical based on the 1980 film of the same name, delivers an inspiring story wrapped in a fantasy romance adventure. Workhouse Arts Center’s take on the show, directed and choreographed by Stefan Sittig, captures its whimsy and gut-busting comedy.

Xanadu follows the Greek muse Clio (Jessica Barraclough) as she travels to Earth disguised as the Australian Kira to help struggling artist Sonny (Pat Mahoney) overcome his creative block and achieve his dreams. Hijinks, both mortal and divine, ensue as the pair grow closer, ultimately learning the value of chasing one’s dreams despite potential obstacles.

The cast delivered magnetic performances. Each of the nine muses was bursting with personality. While Barraclough definitely embraced her role as head-muse–turned–girl–from–“down-under,” moving with grace and charming with her sweet and melodic voice, her sisters were equally up to the task of portraying their divine characters, filling the stage with near godly charisma every time they entered a scene.

Melpomene (Jolene Vettese) and Calliope (Audrey Baker), Kira’s scheming muse sisters, stood out throughout. Calling back to the Greek myths their characters are drawn from, Vettese and Baker portrayed the wicked muses with an air of villainous grandiosity. As they pranced and sashayed across the stage, cackling and delivering every line with charisma and malice, the two worked together to sell the entertaining over-the-top villainy of their characters, enhancing the overall humor of the show.

Every minute of Xanadu was a pleasure to watch, delivering the show’s heartwarming story and inspirational themes with welcome humor and cheer. From visual gags and clever puns to eccentric mannerisms and fourth-wall breaks, almost every scene leaves the audience nearly doubled over in laughter.

Through its hilarity, Xanadu maintained a surprisingly heartwarming tone, a welcome element attributable to its wonderful cast and the sheer chemistry they had with one another. From Melpomene and Calliope’s delightfully villainous antics to the budding relationship between Kira and Sonny, the cast painted each scene with believable charm and cheer.

The songs of Xanadu also worked perfectly as the cast delivered vocally captivating performances. The musical elements of the show, directed by Merissa Martignoni Driscoll, were thematic, enhancing each scene with lively riffs and melodic chords while supplementing the characterization of the show’s star players.

“Evil Woman,” Melpomene and Calliope’s primary villain song, showed off the cast’s vocal prowess as Vettese hit impressive notes amidst Baker’s hilarious (yet just as impressive) adlibs and riffs. “Suddenly” was equally captivating as Barraclough and Mahoney wowed the audience with their sweet harmonies and conveyed their characters’ growing connection to one another.

The choreography in Xanadu was energetic and thrilling, pairing perfectly with the music. Sittig’s choreography was especially mesmerizing when the muses danced in unison, all while managing to maintain their individual quirks in every movement. The cast gracefully glided across the stage, often literally as Barraclough and Mahoney spent much of the show in rollerskates.

Tying the choreography, vocals, and portrayals together were the show’s wonderful costumes. Almost the entire cast acted as background dancers and scene fillers whenever their primary character was not needed, each time sporting sparkly and timely costumes. The dresses the muses wore were especially captivating as each muse wore a Grecian gown in a different color and cut to match her personality.

Overall, Xanadu was incredibly entertaining and a worthwhile watch. Filled to the brim with charisma and humor, the show boasts a well of creativity and charm that is sure to impress its audience, leaving them nostalgic for the ’80s and hoping for their own divine strange magic.

Running Time: 90 minutes with no intermission.

The Xanadu program is online here.