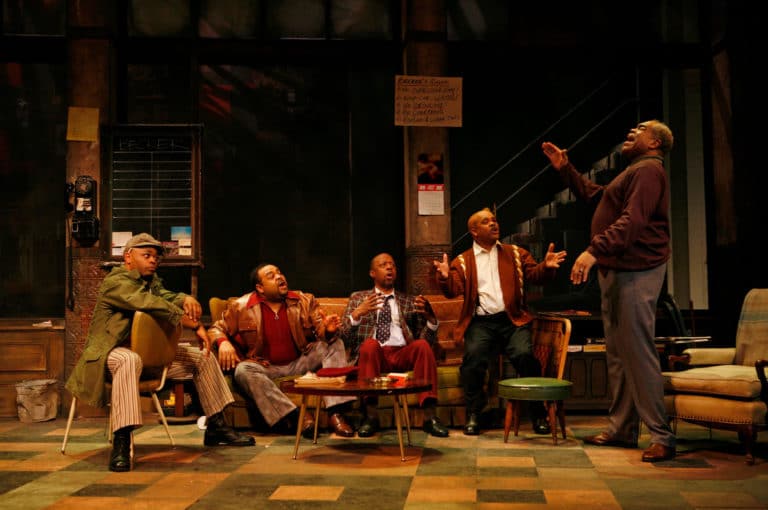 In his 1996 speech, “The Ground On Which I Stand,” acclaimed playwright August Wilson charged the American theatre industry to take seriously the funding and producing of Black theatre. This includes not casting Black actors in roles originally written for white actors (condemning “colorblind” casting), but rather to program plays by Black playwrights, hire Black directors and designers, and even include Black employees at the administrative and leadership levels. Larger, better funded regional theatre has had a long history of exclusion, as pointed out by Wilson and other theatre artists of color.

While the last few years have seen the appointments of more diverse artistic directors and administrators at the helm of several LORT theatres (such as Hana S. Sharif at The Repertory Theatre of St. Louis and Nataki Garrett at Oregon Shakespeare Festival, among others), Washington D.C.’s rich history of Black theatre can often be overlooked and underexplored.

Alongside its intriguing history of African American culture, Black theatre in D.C. has always been vibrant. The African Continuum Theatre Company, once one of D.C.’s premiere companies dedicated to Black theatre, has contributed to this exciting, but underexplored legacy.

Founded in 1989 by John L. Moore III, who served as its Executive Director, the African Continuum Theatre Company sought out to provide a space for people of the African diaspora to produce, perform in, and create theatre. African Continuum joined the ranks of D.C. Black Repertory Company, founded by actor-director-producer Robert Hooks, a fellow theatre company dedicated to a similar goal.

African Continuum became a full producing theatre company in 1995, which led to numerous productions of African American plays. Some of its highlights ranged from an early production of George C. Wolfe’s Spunk (which he adapted from the short fiction of Zora Neale Hurston) in 1993 to staging the D.C. premiere of Lynn Nottage’s Intimate Apparel in 2008. The latter production was helmed by Jennifer Nelson. I had a chance to talk with about her experience with the African Continuum Theatre Company.

Nelson grew up in a family of artists. Her father was an employee in the U.S. Army, but he was also, in Nelson’s words, “an incredible poet.” He installed in her and her sister – also a poet, and living in New Jersey – an appreciation of, and hunger for, the power of words. She became an actor and director in her native California, until an offer from Living Stage—a multiracial, community engaged theatre for social change founded by Robert A. Alexander in 1966—for an acting role brought her to Washington. A transplant from California, Nelson came to the company to take over as its first artistic director after it fully transitioned into a full producing theatre. Nelson recalls having grown tired of working at Living Stage (saying that “it’s a long story.”).

She longed for other theatrical opportunities. While working with Living Stage, she found herself attending productions at D.C. Black Rep, getting to know others in DC’s black theatre community, and eventually was introduced to Moore. Notably, one of the people Nelson was introduced to was Kenneth Daugherty, an actor and director who worked for D.C. Black Rep and one of the founding members of the African Continuum. She mentions that she “kind of stumbled into [the African Continuum],” but that serendipitous encounter led to an exciting new career direction.

Having developed an interest in producing non-traditional theatre from working with  Living Stage, Nelson wanted to produce theatre that “impacted on people’s lives—not only on the actors, but the people that came to see us.” That kind of ethic pushed her to pursue opportunities beyond Living Stage, leading to her position at African Continuum, where she remained for more than a decade. After Moore’s departure from the company, Nelson says they were looking for someone to lead the company and she was that person. “It was me! I could work at a place where there was no money,” she recalls, with her incredibly infectious laugh.

Nelson notes that one of the biggest challenges of African Continuum was space and that there was often a difficulty in securing enough of it to serve their production and rehearsal needs. She remembers the building where the African Continuum Theatre Company was housed, which was located in Northeast DC near Catholic University. The former space for African Continuum was too small for what they needed, but was ultimately what they could afford. One of the greatest challenges of running a black theatre company comes down to being underfunded—a problem that was not only endemic to ACTCo, but continues to be a problem around the country, Nelson said.

Nelson emphasized the importance of connection to both her time moving to D.C. to while she was leading African Continuum. She talked about the younger and emerging artists she worked with continuing to introduce her to new theatre artists and new works. But one of her biggest lessons she learned as an artistic director was the importance of networking and leveraging connections to acquire and share resources. She cited an example was asking Zelda Fichandler, one of the co-founders and first artistic director of Arena Stage Theatre Company, if she could use one of Arena’s spaces for rehearsal. “I didn’t know I could just ask the Queen of Arena [Fichandler] that question!” Nelson exclaimed, bursting into laughter. She was adamant about how those kinds of connections were important to fulfilling the needs of African Continuum and in her career after she left the company. Learning to ask for help was a part of running a Black theatre company and “going out on a limb” helped her during her time doing so.

I asked Nelson about the ways that her life and travels affected her artistry. She spoke about her wanderlust and the many places she has been able to travel. She described having a bowl of soup and adding new ingredients to increase its flavor and appeal, searching for “the things that are interesting to you, are delicious, and make you want to have more or go to the other place where this is made.” From growing up all over due to her father’s military career to a study abroad experience during her college years in France to travels in Africa with her sister, Nelson is still not satisfied, mentioning that sometimes she feels she hasn’t been enough places. Nevertheless, she is still grateful for where she has been. “I feel blessed that I was able to make all of these moves […] and to have the spunk to go places I have never been before,” says Nelson. The D.C. theatre community is blessed as well that one of those places was here.

In a time where the precarity of theatre-making has been emphasized due to the pandemic, it is doubly important to sustain the lifeblood of smaller and underfunded theatres, especially Black theatres. Though the African Continuum Theatre Company is no longer producing theatre, its influence and history is continued to be felt throughout the DMV-area. As DC Theatre Scene is in its final month of publishing, it is important to look back in order to look forward.  Celebrating the history of Black theatre companies is essential to preserving the future of Black theatre. 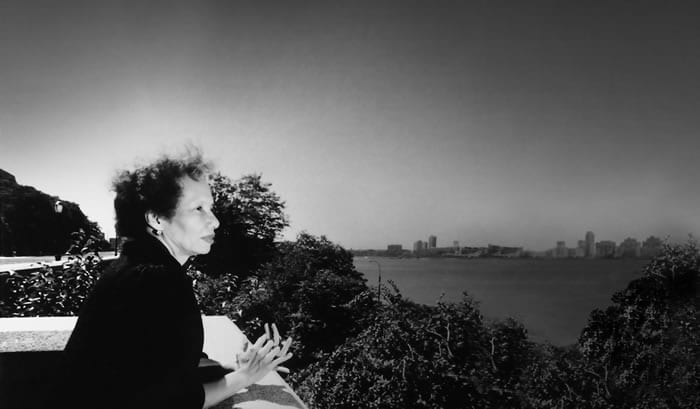 When I first encountered Adrienne Kennedy, through her Obie award winning 1964 play Funnyhouse of a Negro as a student in graduate school, I was surprised I had never heard of her. After all, I had studied Theatre and English literature as an undergraduate, attended a woman’s college, and completed a great deal of coursework featuring female playwrights. Yet here was this Black woman writing experimental, challenging theatrical work in the 1960s, and I was not familiar with her.

While the Black Arts Movement is known primarily for names such as Amiri Baraka, Larry Neal and Sonia Sanchez, Kennedy is rarely included in this esteemed list. Despite her numerous career achievements in theatre, her creative collaboration with theatre giants such as Edward Albee, and the inclusion of her work in university classrooms, one would be hard-pressed to find her plays receiving full productions in regional theatres. Even though I have read her plays and written on them for courses, I have never even heard Kennedy’s words out loud, let alone experienced a full production.

Knowing that there were many people out there who also had never even heard of Adrienne Kennedy, let alone ever read or seen her work, Nicole A. Watson, former associate artistic director of Round House Theatre and incoming associate artistic director at McCarter Theatre Center in Princeton, New Jersey, sought to change that. Two years prior, Watson directed a staged reading of Kennedy’s Sleep Deprivation Chamber at Shakespeare Theatre Company for its ReDiscovery Series, a program designed to introduce audiences to lesser-known playwrights. “It got me thinking,” Watson recalls, “Why wasn’t I directing her work? Or anybody?” An audience member during the talkback also asked the same question, further clarifying that this was a dearth that needed to be rectified.

And then, in March, the theatres shut down. In a discussion with another black woman about the state of theatre, Watson remembered saying, “We’re not bound by the things that go into a season selection.” The unprecedented amount of uncertainty accompanying the impact of the pandemic on the global theatre industry is certainly enough to be anxiety-inducing for theatre artists and professionals everywhere. But Watson considers that there is “a freedom in this moment to rethink” and that freedom led her to proposing the idea of a way to celebrate and produce Adrienne Kennedy’s work. Noting that her plays are “real, visual, and poetic,” Watson recognized that it could be interesting to produce Kennedy in the virtual platforms as they lend themselves to the form well.

Thus, “The Work of Adrienne Kennedy: Inspiration & Influence” was born. A partnership between Round House Theatre Company and McCarter Theatre Center, the virtual festival features four of Kennedy’s plays: He Brought Her Heart in a Box, Sleep Deprivation Chamber, Ohio State Murders, and Etta and Ella on the Upper West Side. Directors include Raymond O. Caldwell, Valerie Curtis-Newton, Timothy Douglas, and Watson herself.

Watson was drawn to He Brought Her Heart in a Box because of its timeliness for our current political and social moment. “In a time where we’re really being asked to examine our thinking and the way in which our thinking (or someone else’s historical thinking) has influenced racist institutions and white supremacy, to have [Kennedy] render that theatrically in such a direct way, I was so struck by it,” Watson remarked, also noting how Kennedy’s work is forward-thinking. One of the plays, Etta and Ella, marks the world premiere for the 89-year old playwright. Watson emphasized the decision was made to highlight this new work and its lyrical and incisive language, a trademark of Kennedy’s plays.

Another of the plays, Sleep Deprivation Chamber—which Kennedy co-wrote with her son, Adam Kennedy—has a timely and painful geographic relevance: the play details Adam’s personal experience with police brutality at the hands of the Arlington Police Department. Watson believes that this play had to be included, especially since Round House is located in a part of the DMV theatre community.

Watson sees it as the perfect bridge between her closing chapter at Round House and her new position at McCarter, which is funded by a BOLD grant for female-identifying leaders. But the partnership also has benefits for both theaters, which includes the reach to a wider audience, leading to more people being exposed to Kennedy’s life and work. Noting that it “allows for a different kind of access,” this is an opportunity to really demonstrate the importance of Adrienne Kennedy in the theatrical world. “For me, it feels like a huge gift,” Watson says.