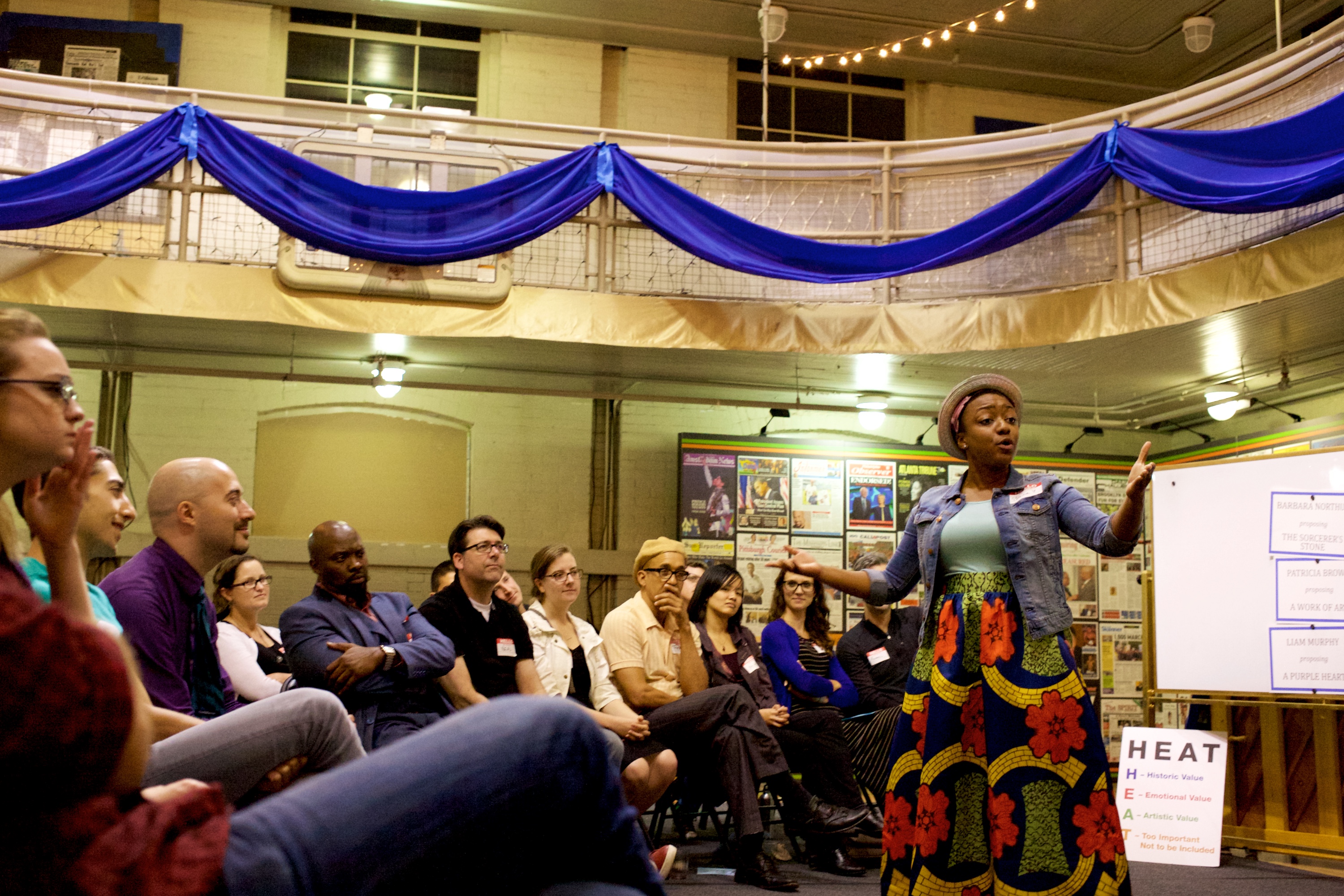 I arrived at the Thurgood Marshall Center on a Wednesday evening, fighting a cold and feeling glum. That feeling would soon change. As soon as I entered the Center, a cheerful woman wearing a nametag greeted me. She turned out not only to be a ticket taker, but an actor as well.

“So glad you could make it for the quinquennial ceremony! We’ll be opening the meeting room shortly; you can fill out your nametag in the meantime. Would you like to nominate yourself for ombudsperson tonight?” I quickly discovered that Dog & Pony DC’s production of Beertown begins the minute you enter the building.

“No thank you,” I smiled as I filled out my nametag, nervous about the level of interaction this performance would require. I made my way to the room at the end of the hallway and entered into a quaint scene of Mid-Western civic assembly. Townspeople milled about the old gymnasium and poster boards displaying information about Beertown encircled the rows of folding chairs. A podium, whiteboard and an old piano sat at the front of the room. Instrumental music that wouldn’t sound out of place on an episode of “Prairie Home Companion” played quietly in the background, adding to the small-town ambiance.

A Beertonian immediately approached me and shook my hand. He introduced himself as Michael Soch, the Mayor of Beertown, “So good to see you! Glad you could make it to the quinquennial—how’s your family doing? You’re working at the Library now?” “Uh…yes. Yes I am!” I stammered, remembering that there is no saying “no” in improv.

All around me, Beertonians engaged in similarly upbeat conversations with other audience members. Some actors and audience members spoke to each other in American Sign Language. Interpreters also stood by to interpret between those signing and those speaking. A table of cookies – part of the advertised “dessert potluck” — sat on a table in front of the podium and a woman entreated everyone present to “please eat some cookies!” Near the refreshments sat a large metal beer barrel, the quinquennial time capsule. (Note: A quinquennial is an event that recurs every five years.) 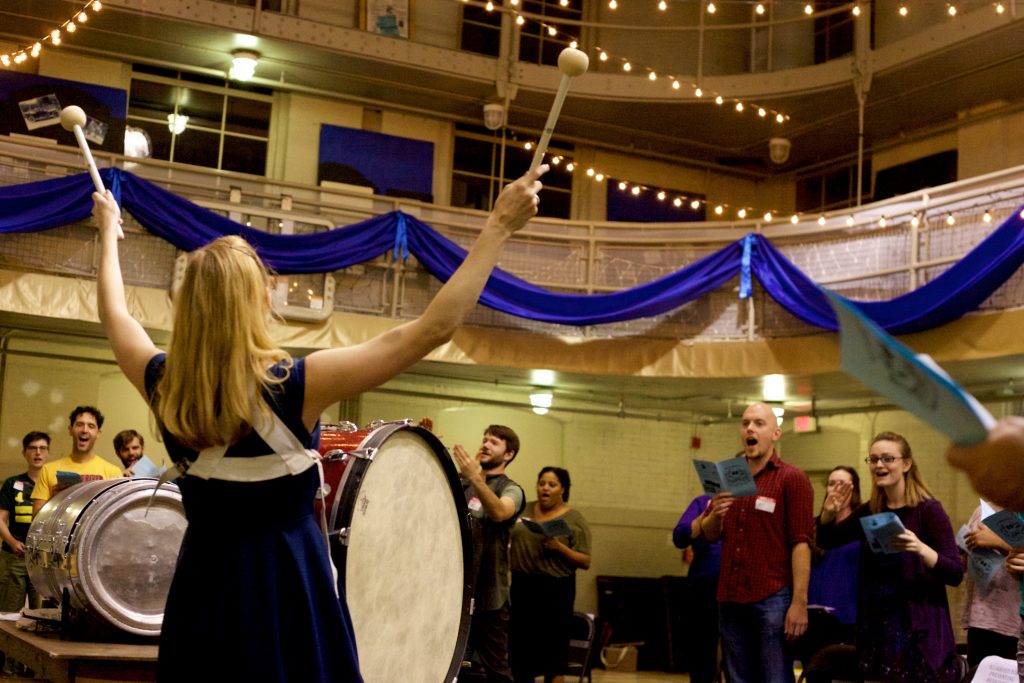 As I settled into a folding chair, a man in a suit approached me and began talking about the benefits of purchasing Beertown real estate. “Are you new in town? I’m Joseph Rodgers Davenport, but everyone calls me Rodgers! Just give me a call if you’re ever in the market for a house here in Beertown!” He handed me a business card, one of many small touches that made the performance feel hilariously authentic. Rodgers is played by actor DeJeanette Horne.

After I sat down, I looked around the room. It was becoming difficult to tell some of the audience members and the actors apart. I leaned toward the gentleman beside me, “I don’t know if this is the right way to put it, but are you a participant or an audience member?” I asked. “That’s a good question,” he chuckled. He explained to me that he was very excited to be attending the performance that night because had seen Beertown during its original run in autumn 2011, and also during the 2012 Capital Fringe Festival. “No two performances of Beertown are ever the same,” he smiled.

The room became quiet as the Mayor (Joshua Drew) began his welcome speech. “I am so thankful that you elected to be here to participate in Beertown’s 21st Quinquennial Time Capsule Day Ceremony! This process allows us to reflect on who we are today, in light of who we were five, ten, 15 years ago, and so on.” He introduced several other Beertonians: archivist Joann Sugarman (Eileen Earnest), artist Patricia Brown (Natasha Gallop), Fire Marshal Liam Murphy (Jon Reynolds), Warden Franklin Li (Jacon Yeh) and several other colorful characters also said their hellos to the room.

After a recitation of the Pledge of Allegiance and an invocation by the Daughters of the Ninkasi, the residents of Beertown led the room in a series of uproariously funny civic activities. We were asked to recite the Beertown oath of civic responsibility, we elected a citizen ombudsperson, and the townspeople led the audience in a raucous rendition of “The Beertown Hymn”, purportedly written in 1899.

At the heart of Beertown’s plot is the need for the room to arrive at a
collective decision regarding the town’s time capsule. During each quinquennial ceremony, the audience is introduced to the contents of the capsule and asked to vote on which items to keep and which items to remove. Certain “eternal” items, artifacts representing the early history of the town, remain permanently interred in the capsule, while others are up for debate every five years. Only a certain number of items can fit inside the time capsule at any given time. Warden Li explained that everyone present should judge the artifacts on the basis of the acronym, H.E.A.T: Historic Value, Emotional Value, Artistic Value, and Too Important Not to be Included. If an object no longer seemed to have the same HEAT, it could be voted out and a modern artifact could take its place. 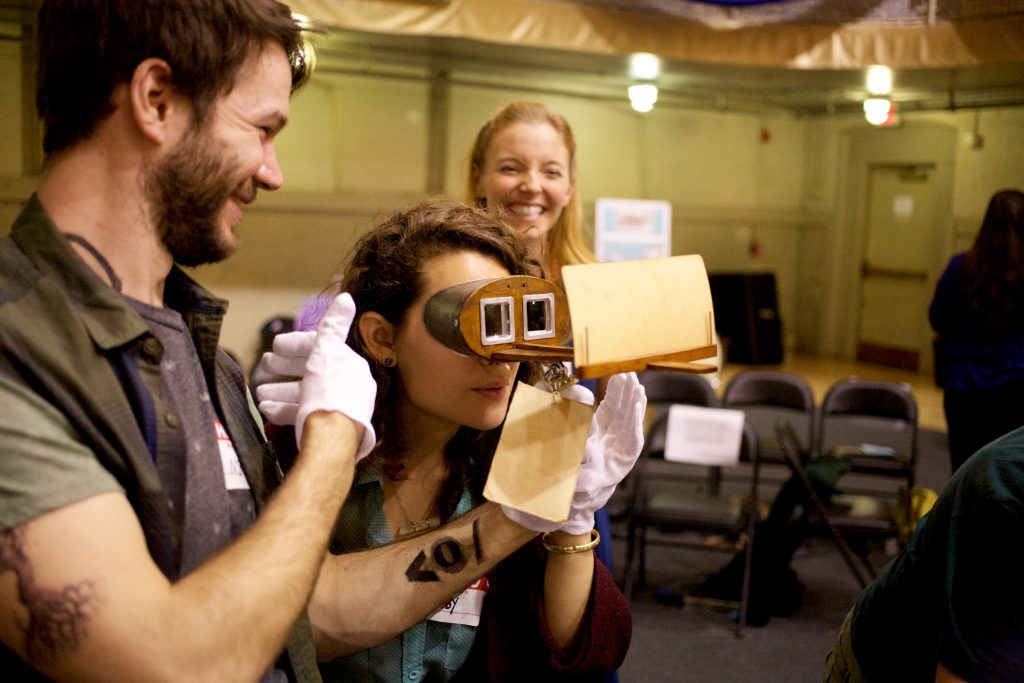 Within all of its silliness, Beertown digs into how our society elects our collective American history. “Do things become less accurate the more you remember it?” One of the actors asked during the ceremony. “Every time you remember something, you are recreating it,” stated another actor. Who’s history are we recreating? Who gets to decide what we preserve for public memory? During the voting and debating portions of Beertown, some audience members became very invested in the outcome of the vote. I was surprised in some of the votes I cast myself.

The deaf community plays an important role within the invented history of Beertown, and American Sign Language is critical to the show’s dialogue. Interpreters translated all spoken word for deaf audience members, and vice versa when deaf actors signed to the night’s predominantly hearing audience. Several skits incorporated projected captions and pantomime so that neither signing nor speaking was required.

A few days after the show I spoke with the theater company’s director, Rachel Grossman. She said that Dog & Pony DC has featured deaf actors and incorporated sign language in previous productions of other shows, but not to the same extent as Beertown. “There’s a large deaf population in DC and there’s a significant community of artists here that are underutilized and untapped. Once you make the decision to start changing your practices and becoming more accessible and inclusive, the doorways are open. It takes a lot but it can take very little to start making that change” in the theatre community.

Another way in which Dog & Pony makes Beertown and other productions more accessible is by offering pay-what-you-can showings. “It’s really about creating that environment in which accessibility and inclusion is of the highest priority,” Grossman said.

The world of Beertown is impressively detailed, down to the choice to stage it in the multipurpose room of the Thurgood Marshall Center, a space dedicated to providing educational programs that celebrate the richness of D.C.’s cultural history. Along with the live production, members of the company have created a website — VisitBeertown.com — and the hastag #ITooAmBeertown was even included as a time capsule artifact in a recent performance of the show. 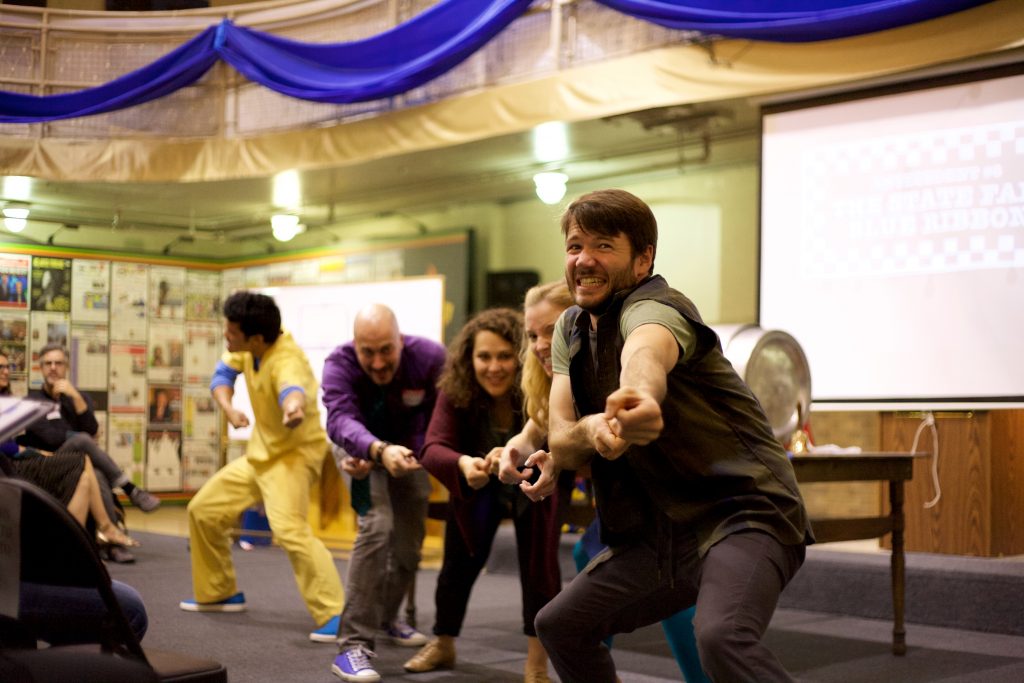 According to Grossman, a critical element of each performance is figuring out the character of each audience. “Some audiences are more invested in observing and watching… sometimes it just takes awhile, like pushing a ball up a hill, and you just don’t know how high the hill is because you’re behind the ball pushing it! Sometimes you don’t even touch the ball and the ball just falls off the hill and then you run after the ball,” she laughed.

As a company, Dog & Pony DC is invested in the impact of audience-integrated work, and spreading that type of theater throughout D.C. and beyond. Beertown was a collective effort, originally created by a group of 17 members. Some members of the original group are currently working with another theatre company in San Diego to develop a performance called “Beachtown” that explores the identities of beach communities in southern California.

Beertown is unexpectedly immersive while offering critical commentary on the importance of civic duty. The show gets at the zeitgeist of American community politics in a way that’s completely refreshing, and needed. It’s a show likely to cause audiences to question their own involvement in local elections, and wonder about their personal impact on the histories of their communities.

Beertown runs through November 7 at the Thurgood Marshall Center. For tickets and more information visit Dog and Pony’s website here.

This article was originally posted on Tagg Magazine. 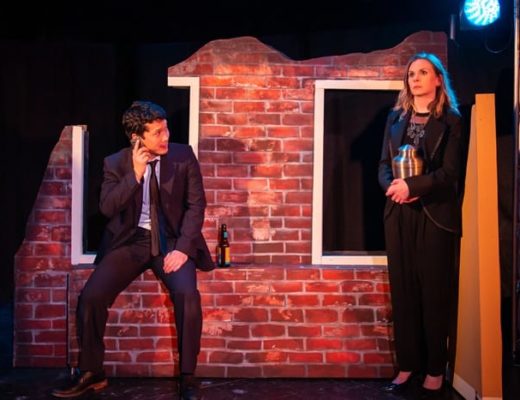