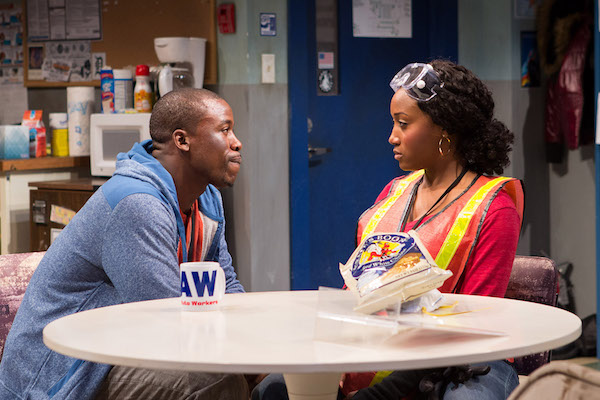 From the time she started to form words, Shannon Dorsey was acting, shaping the theater into not only a home, but an eventual haven of self-expression and love. The space underneath the family dining table was her first stage, and she made anyone around her watch her early childhood shows.

“I’ve always enjoyed theater as a form,” said Dorsey. “I’ve danced since I was three years old, tap, Hip-Hop, but have been doing ballet the longest. I found [dance] satiated this thing of being on stage but it didn’t do everything I needed it to do.” As a student of both Wilson High School and Duke Ellington School of the Arts, Dorsey could take theater courses at the latter for half the day in her senior year of high school. Though she was not always exposed to roles in plays, she stayed on stage.

“Everyone knew I was going to be an actor,” said Dorsey, reminiscing on her early performances and community encouragement. “That’s something that has been so consistent from high school to college – acting was something that I was always going to do, regardless whether I had access to it.”

Growing up in Washington D.C., Dorsey’s childhood and education consistently emphasized the importance of arts and reinforced her identity as an African-American woman and actress. In her sophomore year of high school, Dorsey was cast as a Russian woman in a “white play with white characters” in a majority black high school, a humorous incident that allowed her to realize the extent of whiteness on stage, despite her teachers and community reinforcing an environment where her identity was not only validated, but celebrated on stage.

Dorsey continued to seek out theater as a safe space, attending Temple University where her pedigree grew and obtaining two degrees: one in communications in theater and another in African-American Studies. “[In college], I realized I am really, really a minority in this world and in my craft,” said Dorsey. “I was told about it, but it was different really experiencing it.”

Dorsey recalled an incident early on in her career where she and her cast were on a national tour for a play. The rest of the cast, who were all white, would make comments on the potential dangers of the neighborhoods they were in. The misplaced comments were discouraging to Dorsey, but led to a pertinent revelation. “I was the only black dot on this white bus,” said Dorsey. “Everyone else was white, only white, and all had perspectives that reflected each other, but not me.”

Dorsey continues to be “fascinated” by the way humans communicate effectively and began to seek out multi-faceted roles of characters that did not just represent her, but the complicated nature of the human spirit. Dorsey spoke on the difficulty on finding roles that sated her desire for diverse and complex representation, while avoiding roles that overly relied on shock value. Still, she continues to make conscious efforts to seek out roles that challenge stereotypes and societal norms, a steadfast motto that has led her to plays such as “Breath, Boom,” “In the Red and Brown Water,” and “Marcus; or the Secret of Sweet.”

For the role of Shanita in “Skeleton Crew,” the Dominique Morisseau play that is currently playing in Washington D.C.’s Studio Theatre, the studio reached out to Dorsey to audition, which delighted her. “Shanita wasn’t a damsel in distress,” Dorsey said on what drew her to the role. “It wasn’t another story of a black pregnant woman and how things suck.”

Dorsey and director Patricia McGregor, as well as the rest of the cast, worked through character development from the first table work on, coming up with an intimate and stirring play with multifaceted characters. Dorsey stated that nobody’s words could “do the play justice,” urging everyone to see the play for its universal and touching themes.

Beyond representation, Dorsey consistently approaches all her roles with love. “Love is the ultimate complexity we haven’t figured out yet,” she said. “I want to take roles that touch my heartstrings. Love is everywhere, and I am made of love.”