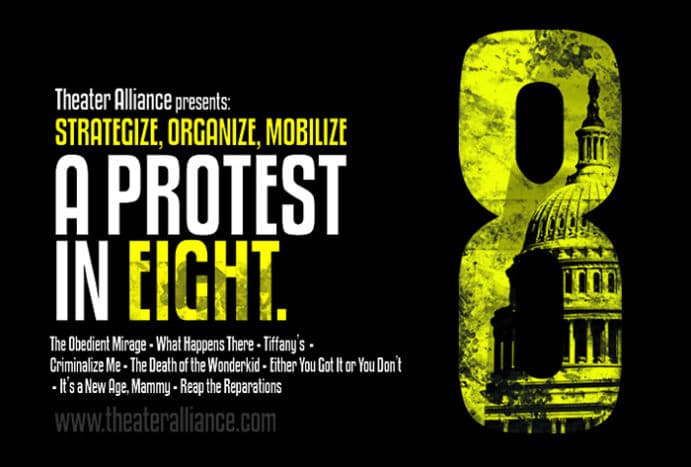 A daughter confronts her police officer father. An absurdist game show tries to determine who is the most Black. A candidate for district attorney confronts her traumatic past. A sex worker encounters a magical restaurant. These are just a few of the snapshots from Theater Alliance’s virtual play festival, Strategize, Organize, Mobilize: A Protest In 8. The festival, presented in a film format and helmed by artistic director Raymond O. Caldwell, features eight new plays from Roney Jones, Alric Davis, Savina Barini, Emmanuel Key, Kayla Parker, Tehya Merritt, Naima Randolph, and Carmin Wong and an ensemble cast of talented actors.

The plays were all written to address systemic issues at the intersections of race, gender, sexuality, and class (to name a few) such as prison abolition, decriminalizing sex work, ending cash bail, reparations, dropping charges against protestors, and the school-to-prison pipeline. Following each play, there is a short clip of an interview between the playwright and Caldwell on the topic that the particular play discussed along with resources to join the fight. The result is a powerful educational tool that is meant to challenge perceptions around controversial and complex issues, expanding viewpoints in the process.

Perhaps the play’s most effective artistic strategy comes in the playwrights’ choices to represent society’s most neglected, criminalized, and demonized figures. For example, Roney Jones’s The Obedient Mirage, the first play, represents a conversation among the Vaughn family, where River (Olivia Dorsey) questions her father—the police officer—Elliot’s (Deimoni Brewington), role in the death of a young, autistic Black man. The play underscores the importance of defunding the police as a way to protect society’s most vulnerable, and also highlights the intersection of blackness and disability.

An especially compelling performance by Brewington as Albert in Savina Barini’s What Happens There, which follows Maria (Imani Branch), young Black woman running for District Attorney and a prison abolitionist, revisiting her traumatic past. The story beautifully unfolds and reveals Albert’s violent crime, but handles it with care. Both Branch and Brewington approach the extremely complex narrative with understated yet powerful performances that infuse Barini’s script with passion and nuance and, ultimately, makes a case for reducing prison populations.

Caldwell’s skillful direction enhances this dynamic and robust production. His eye and talent particularly for whimsy, fantasy, and parody shine especially in the satirical plays, Alric Davis’s Reap the Reparations and Tehya Merritt’s It’s A New Age, Mammy! The direction underscores the absurdist narrative in Reparations, particularly in its retro 1980s aesthetic, reflected in Matthew M. Nielson’s sound design and Jeannette Christensen’s costumes. Reminiscent of George C. Wolfe’s The Colored Museum with its humorous dialogue yet incisive critique, Caldwell is able to bring out the humor in these two different scripts, creating a wonderful balance with the heavy material.

Comedy can often be an incredible tool for broaching difficult topics, which is deftly illustrated here. The moments of comedy offered throughout the festival offered a welcome reprieve while also not letting up on the goal of educating and empowering audiences on this set of important issues. An example of this can be seen in Emmanuel Key’s Tiffany’s, where a group of Black femmes in an underground world help Neith (Branch), a sex worker, see her own value and self-worth. The fantasy of this piece accompanied by the camaraderie among the other characters (with gorgeous chemistry among Moses Princien, Janelle Odom, and Dorsey) balanced the piece’s tackling of a challenging topic with the power of black femme communities. Though the festival’s broad scope can feel overwhelming, Caldwell’s attention to detail and specificity grounds it.

Ultimately, A Protest In 8 demonstrates the power of theatre to stage important dialogues on challenging topics. In the short clip following their play, Jones remarks that “[i]magination and protest go hand-in-hand” and underscores that “imagination, joy, play ARE a part of protest.” These statements from Jones highlight how critical theatre is to imagining a world of liberation, especially for Black communities.

It is fitting that the festival’s concluding play is Carmin Wong’s Criminalize Me, which beautifully blends poetry and dance with dialogue in a critique of the school-to-prison pipeline. Wisdom (Branch), a teenager struggling with a traumatic moment, uses poetry as an escape. Wong’s poetic meditation (alongside Caldwell’s beautiful direction) provides a map for how to make use of art for both protest and healing. Developed in concert with national social justice organizations such as Black Lives Matter Houston, Project SAFE, and Southerners on the New Ground (SONG), the festival ensures that audiences are not simply enjoying the plays in a vacuum but also are connected to on-the-ground work that is occurring across the country. A Protest in 8, then, arms audiences with the tools not only to strategize, organize, and mobilize, but to dare to envision a better world. 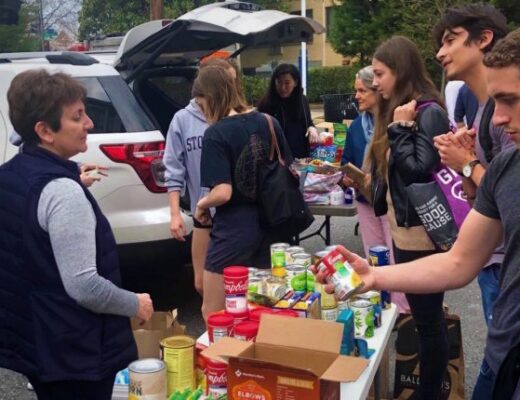 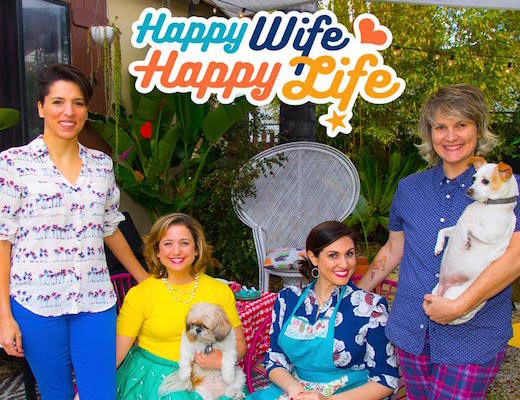