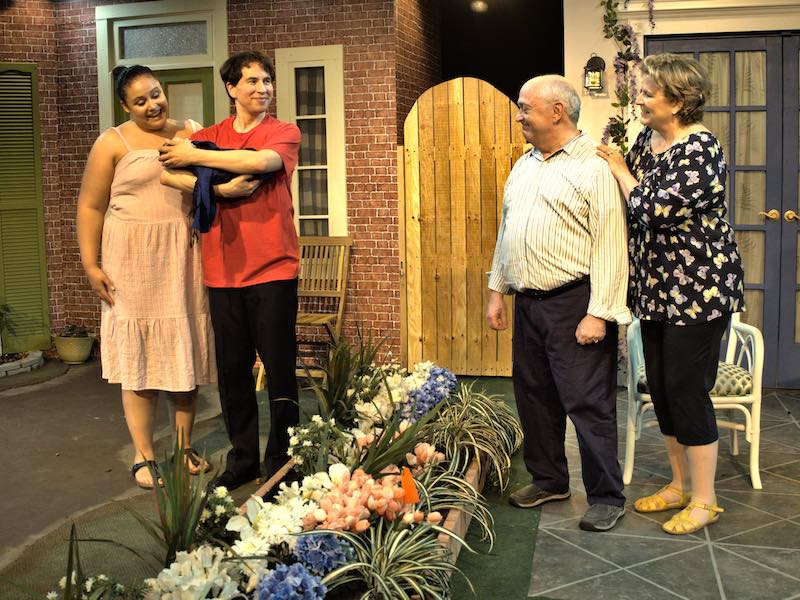 Striking the perfect balance between humor and sincere reflection, Native Gardens serves as the ideal close to Silver Spring Stage’s season. Amid a year that marks a resurgence and revival for theater across the globe, this play does an excellent job of portraying the difficulties of transitioning and adapting in an ever-changing world.

Producer Maura Suilebhan and Director Matt Ripa lead the presentation of this wonderful play. Native Gardens gives a glimpse into the life of new and old residents of the DMV as it explores the unique dynamics between new and old residents. The play follows Pablo and Tania Del Valle (Chris Galindo and Alexandra Bailey) as they settle into their new neighborhood and navigate an interesting relationship with their new neighbors, established residents Virginia and Frank Butley (Sarah Holt and Scott Holden).

As the play progresses, both couples must learn this new dynamic across a shared property line. A self-proclaimed “love letter to the DMV” by Playwright Karen Zacarías, Native Gardens is a story that capitalizes well on its core themes of diversity, home, and change. As the couples work through their many differences and explore their unique similarities, Zacarías highlights the social and cultural melting pot of the community, especially as new generations come into contact with the old.

Although relatively short at a mere 90-minute runtime, the play handles its undeniably important subject matter solidly. Every moment of Native Gardens feels purposeful and highly impactful, revealing keen attention to detail and appreciation for the real stories this play adapts.

Through its intentional and tactful treatment of its core themes of change and diversity in the DMV, Native Gardens remains topical three years after its debut. The play, in its reflective nature, thus conveys an awareness and attention to detail that is only improved upon by the incredible cast.

Through its explorations of these themes and important topics, Native Gardens also does an amazing job of balancing its tone with genuinely engaging and creative humor. At no point do the jokes feel out of place or forced; the play’s humor enhances its overall presentation and allows for moments of cheer that flow seamlessly into the play’s conclusion and complement the more serious moments rather than competing with them.

The play focuses on its four primary characters, the Del Valles and Butleys, the only speaking roles. This limited cast works extremely well in the show’s favor as the audience is allowed to connect deeply with each character. Bailey, Galindo, Holt, and Holden deliver powerful performances that faithfully portray a group of people doing their best to acclimate to their changing world, thus allowing the audience to become fully immersed in how their stories unfold.

Even beyond their individually powerful performances, the cast of Native Gardens has almost palpable chemistry that elevates their characters further. The respective couples convincingly portray their love and appreciation for each other, but as they break out of their molds and begin to interact separately with the other couple, the true strength of the cast goes on full display. All four actors play well off one another and match one another’s energy in a delightful way that leaves the audience craving more of their one-on-one interactions.

The play takes place in a small space: the backyards of the neighboring houses. The set design, led by Leigh K. Rawls, is absolutely stunning, bringing a layer of wonder to the play while adding to the story with minor but significant prop changes. The small set also allows for focus on the characters and their stories rather than overwhelming them with over complicated design.

Matthew Datcher’s sound design brings another layer of wonder to the play. The sound effects, often used as curiously charming transitions between scenes, add subtly to the show in a way that does not detract from overall audience enjoyment but instead enhances it. Furthermore, the sound design acts as another element of nonverbal storytelling and works well throughout the play to encapsulate and fortify the wonderful story being told.

Native Gardens is a beautifully executed glimpse into the lives of many who call the DMV home. Despite its small scale, the play leaves a grand impact with its lovely story, gorgeous set, and well-executed humor.