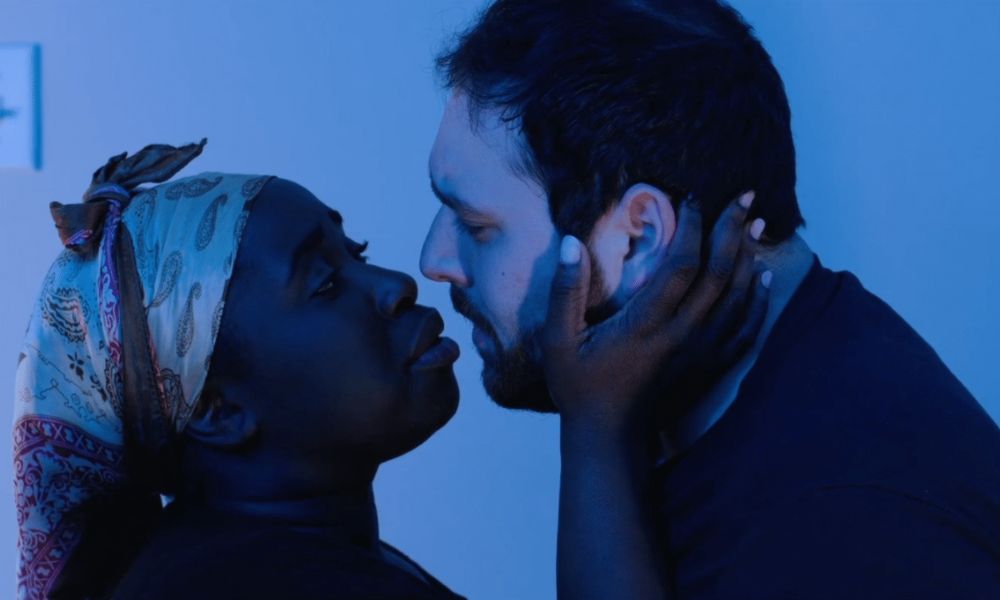 ArtsCentric has streamed their first feature-length film production, Jason Robert Brown’s musical The Last Five Years, starring Ryan Burke and Awa Sal Secka in transformative performances that subvert and surpass expectations. Director Kevin S. McAllister takes an unconventional cinematic look at the story with the help of Musical Director Cedric D. Lyles and dynamic choreography from Shalyce Hemby. The plot follows a young couple through their five-year relationship in specific moments that jump through time and eventually come full circle in a heartbreaking conclusion. To anyone who has ever fallen in love, stayed in love, and learned the sacrifices it takes to make love last, this one’s for you.

The show opens on a distraught Cathy played by Secka, in her gut-wrenching rendition of “Still Hurting.” The song follows her, alone in her darkened apartment, as she mourns the loss of her relationship with her husband, Jamie. Throughout the scene are swift cutaways to clips of the couple from memories past, then the film jumps into the next big number, “Shiksa Goddess.” Here audiences are introduced to the other main character, Jamie, through the animated vocal stylings of Ryan Burke. This quick shift in tone is a thrilling wake-up call to a happier time, sweeping audiences into different scenes as a true live musical would. Through masterful casting and direction, ArtsCentric has achieved a compelling theater experience with all the depth, diversity, and raw talent that could be expected of a Hollywood production.

The story is shot in a way that gives audiences multiple insights into the characters’ love story every step of the way as we view both sides through the perspectives sung by Jamie and Cathy in each of their respective songs. Cathy’s perspective is reflective, traveling backward in time, while Jamie’s moves forward, to a future Cathy already knows. Their monologues are delivered through lively musical numbers that carry the plot along at a steady pace with stellar performances from both actors, showcasing Secka’s wide range and belting abilities along with Burke’s impressive vocals, which bear an uncanny resemblance to Jeremy Jordan’s in the original cast recording. The talent and magnetic chemistry these two actors bring to their characters on screen is a hypnotizing thrill to watch.

Expressed in their story is the age-old battle between romance and career: How long can a partnership that’s supposed to be equal thrive when one person is flying high and the other is down on their luck? And what sacrifices are necessary to create our own version of happiness? Cathy is a struggling actress and Jamie is a successful author. As enticing as it is to watch these characters fall in love, we witness the harsh realities of the balancing act between managing a career, whether successful or failing, over your relationship. Feeling as though you should shrink yourself down, or that you will never reach up to the level your partner is at, remains the overarching conflict between them.

Both Cathy and Jamie are unfulfilled in some aspect of their lives. Their story of trying to make their marriage work, while in the midst of a major power imbalance, is a valid portrayal of why some things just aren’t meant to be. They both require the other to be something they are not. Jamie expects Cathy to play the “supporting wife” to his overwhelming success as a published young author while her own career hangs by a thread. Jamie has more expectations, obligations, and people relying on him than ever before, and yet he feels he is never able to truly enjoy his speedy rise to the top due to his wife’s struggle to flourish and overcome the constant setbacks in her own career.

Meanwhile, we witness Cathy feel constantly overlooked, brushed aside, and forgotten. She brings Jamie down by her own self-doubt, insecurities, and jealousy sprung from living in his shadow. Jamie brings her down by becoming so engrossed in his newfound fame and fortune that he is no longer able to be the attentive, faithful man she married. Both characters are similarly pursuing their artistic dreams, but at varying stages, showing a clear picture of what it means to be in different places at different times, and how this can affect those who come into our lives..

Director Kevin McAllister makes conscious efforts throughout to put his own spin on the piece with diverse casting and cinematography that pulls viewers in and keeps its audience thoroughly invested. An example is the creative visuals added to “The Schmuel Song.” Sung by Ryan Burke, it shows Jamie’s attempt to cheer up Cathy with a lighthearted holiday story. Here McAllister adds his own unique interpretation of the number by including in the scene cartoon footage of the characters Jamie is singing about. McAllister’s bold choice to have audiences not only hear the story but see it unfold on screen adds an entirely new element to the number and allows audiences to experience the story of Schmuel along with the characters telling it.

McAllister skillfully utilizes meticulous camera work as a lens to show the inner thoughts of the main characters in their quiet moments, revealing a level of depth in their psyche beyond what they tell us in song. A key moment of this is when Cathy comes home from her audition, having just performed “Climbing Uphill.” In one of the few moments of spoken dialogue in the show, Jamie recites to Cathy some of the story he is currently writing, and although she remains silent, we are able to get into the pain and hurt in her mind. We are jolted back and forth through quick flashbacks of her previous performance, where she sings about trying to make it as an actress and the grueling process of constant rejection, struggling to support herself while living in Jamie’s shadow. In between these flashbacks are frequent cuts to closeups of her face in the present scene, showing only the expression in her eyes. It is telling in this moment that there is no closeup on her mouth, because she feels voiceless, only sharing her deepest thoughts with us through a look in her eyes, and the imagery running circles in her mind.

ArtsCentric’s adaptation of The Last Five Years meets the challenge of converting a musical into film, beautifully transforming the story using the fundamentals of cinema, and proves that with a clear vision and team of dedicated talent, true art can be made. 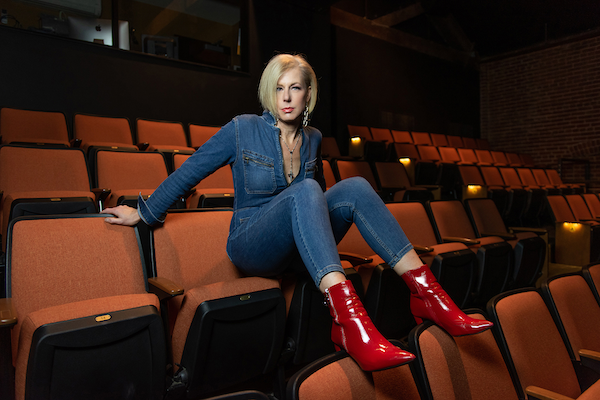 Lisa Friday takes the stage in Trans Am with nothing more than her acoustic guitar and her story. Told through songs fresh from the vault of original music she’s written over the last 20 years, Friday invites viewers to join her on a rock and roll trip down memory lane. The live, one-woman musical depicts her own transgender experience, raw and real.

Friday’s decision to create and star in her own life story arose as a product of her own self-reflection in the wake of COVID-19. After the cancellation of Keegan Theatre’s Hedwig and the Angry Inch, in which she was asked to play Hedwig, Friday took time to reflect on current events and injustices taking place. She believed that what was important to show at this time wasn’t flashy outward spectacles, but honest depictions of the realities people face in life. Thus, Trans Am was born.

Originally performed for a virtual audience, widespread success of her remote production prompted her to bring the show to life on stage. “The Keegan asked me to be part of their 25th anniversary season and we all decided we weren’t going to change a thing. We were just going to go with it exactly how it is,” Friday explains.

She describes her story as a means of understanding our common human desire for self-actualization. When discussing where this self-actualization comes from, Friday explains that “to go through a gender transition can be a very isolating experience. It takes so much self-examination and so much clarity about who you are to get through that.” Through this process, she realized that “everything in our world is informing us that there are binary laws to gender norms, that we have to fit in to certain categories and certain places. And as you transition, you’re going to have to walk through every single one of those places. To get through that and survive, that takes a level of self-actualization that a lot of people are never forced to go through.”

Friday shares that despite her happy childhood, there was no room for her to truly find this in the conservative environment she was raised in. She admits, “we may not realize our authentic selves are probably not welcome in.” Throughout her show, Friday details how her connection to music allowed her to find new places to express herself.

Through Trans Am, Friday hopes that audiences resonate with the realities of this human experience. “Being trans doesn’t make me something other, it actually makes me very human.” Her goal is that people get to see transitioning as a real-world human experience and adds for anyone struggling with their own personal journey, “We need love and support in our lives, we need to receive and give that in order to fully realize who we are.

BETTY’s Back for a Holly Jollypocalypse 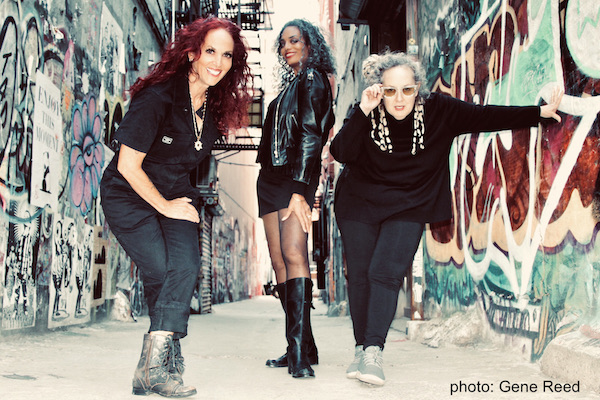 In their much-anticipated return to the stage, BETTY recently announced their holiday concert tour. The iconic queer band is back with live performances this holiday season for their “Holly Jollypocalypse.” Trio, Alyson Palmer and sisters Amy & Elizabeth Ziff will be kicking off their performances in Washington, D.C. and closing out their rockin’ festivities in New Hope, PA.

Over the last 35 years, BETTY has released a total of ten albums along with prominent features of their music on radio, film, and tv. Including their iconic tune, “The Way That We Live,” which featured as the running theme song for Showtime’s The L Word. After three decades together, this strong-willed trio has only grown stronger. They credit their long running success with years of lasting friendship and commitment to one another, and the LGBTQ community. She also adds that their loyal fanbase provided them the drive and engagement to keep at it. “We really keep going because of the fans.” The story of how they met can be found on episode one of their podcast BETTY: Girlband, the Podcast.

In the wake of Covid-19—no longer able to do live performances—the unparalleled dedication these women have for one another and their music shined through. While writing individually, the group remained in touch every day. Elizabeth even admitting to walking miles in the snow to just to get to her sister in upstate New York. It was during this time, that the group was able to transition from sharing their songs with live crowds, to reaching audiences online, with the release of several music videos and taking part in live benefits via Zoom.

Now, live and in-person, the group is thrilled to get back to their fans, aiming to bring together all walks of life and inspire fun-filled comradery throughout the tour. Audiences can expect to hear some great music and hopefully, meet some great people this holiday season.