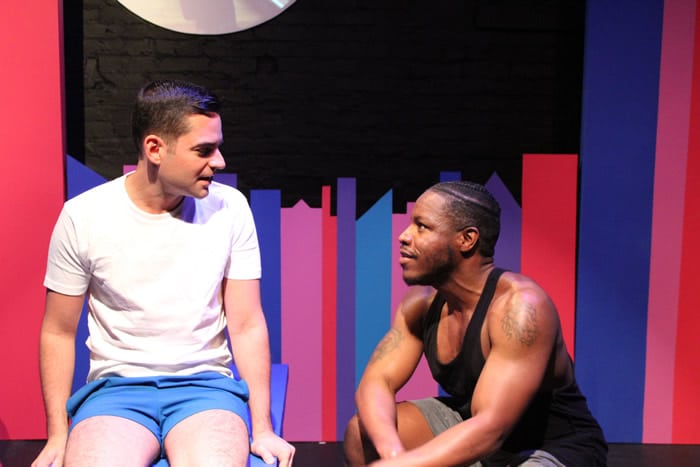 There’s no such thing as love without risk. Risk of rejection. Risk of your partner finding someone else. But for gay men in the ‘80s and ‘90s, at the height of the AIDS crisis, love and sex carried more than just emotional risk—there was physical, mortal danger to be dealt with as well.

And so, at the top of Rainbow Theater Project’s production of Paul Rudnick’s play, Jeffrey, the titular character decides that dealing with sex and love cheapened by the kind of paranoia and fear induced by the virus isn’t worth the hassle, and swears them both off. Hijinks, of course, ensue. Yes, I said hijinks. Yes, in New York City during the height of the plague.

In an impassioned pre-show speech, Artistic Producing Director H. Lee Gable spoke specifically to the gay men of a certain age in the audience, of which there were many, about what it was like to be a gay man during that era, his voice cracking with emotion. He also pointed out that out of that time came what are widely considered to be the two great AIDS plays—Larry Kramer’s The Normal Heart, and the less widely produced Jeffrey. The latter, he noted, helped mark the shift from “dying of AIDS” to “living with AIDS.”

The disparity between the success and acknowledgement of the two works (although, it should be noted, it took much longer than it should have for The Normal Heart to get its due) was no fluke; it came down to the two playwrights’ difference in approaching a heavy subject. In 1992, when Rudnick was trying to find an Off-Broadway home for Jeffrey, he had many a door slammed in his face, not simply because his play was about AIDS, but specifically because it was a comedy about AIDS. Once it did find it a home, thankfully, it was a hit, and served as Rudnick’s breakthrough play.

The plot is relatively simple: Jeffrey (Rinaldo Martinez), is a Midwestern transplant living in Manhattan, making his living primarily as a cater waiter while trying to land acting gigs. He decides that negotiating sex while the specter of the virus looms large is too much of a downer and quits it cold turkey—no small feat for an avowed sexual compulsive. Of course, the moment he commits to celibacy, he meets Steven (Reginald Richard) at the gym and they both feel an immediate attraction. There’s only one problem—Steven is HIV positive, and in a world punctuated by memorials for otherwise-healthy men in their 20s, Jeffrey isn’t sure he can handle the pain of falling for someone just to watch him die.

Rainbow Theatre Project’s production is directed by Robert Mintz, who also directed Rainbow Theatre’s reading of the play in 2016. Mintz does a superb job of preventing the script’s swings in tone from giving the audience emotional whiplash; after all, no matter how many quips you sprinkle into a play about the AIDS crisis, it’s still a play about the AIDS crisis. (My favorite example of this juxtaposition occurs when a gay basher, mid-hate crime, asks Jeffrey what kind of weapon he’s carrying and he replies, “Adjectives? Irony?”)

Honestly, I approached this play with slight trepidation, as stories about the AIDS crisis are my kryptonite—nothing turns my tear ducts from merely decorative to functional quite like them. But Mintz and his cast keep the tone as buoyant as a balloon, while still allowing the more serious moments to make an impact.

Martinez is the engine driving the show, and he does a masterful job of imbuing Jeffrey with an earnestness and authenticity that belies his jokes about his own promiscuity. He’s the audience’s cypher, but in Martinez’s capable hands, he’s hardly a blank slate. Richard exudes charisma and charm as Steven, negotiating with nuance a character who’s drawn to Jeffrey but also disgusted by his retrograde attitudes toward dating an HIV positive man. In fact, Rudnick’s script doesn’t go a long way toward making a solid case as to why Steven is so willing to not only overlook his mistreatment at the hands of Jeffrey, but is, in fact, so enthralled by him that he’s willing to chase him for months—so it’s a credit to Martinez and Richard that they’re able to sell the mutual connection as convincingly as they are.

Jeffrey and Steven’s journey is aided by their mutual friends, Sterling (Matthew Pauli), an older, style-obsessed interior decorator, and his young lover, Darius (Randyn Fullard), a whimsical Cats dancer with an 8th-grade education. While these characters, as written, could easily veer into caricature, Pauli and Fullard keep them grounded and infuse both with real emotion—especially in a pivotal scene toward the end of the play.

The flamboyance of the subject matter is reflected in PJ Carbonell’s candy-colored confection of a set that allows for maximum versatility. The clever use of projections also assists in seamlessly transforming the small black box at the DC Arts Center into a dozen different locations. Hannah Katherine Herold’s costume designs don’t always scream early ‘90s New York fashion to me, but she also had a huge number of different characters to clothe, and I was hardly pulled out of the moment by it.

To that point, Jeffrey is essentially s a time capsule of a very specific time—a recent period piece of sorts. And, to that end, some of references and jokes are made even funnier by our modern context (Rudy Giuliani being called out as wearing chaps at the Hoedown for AIDS, for example, elicited quite a few chuckles), while others certainly land differently than they did at the time, (like when, early in the show, Jeffrey declares that “sex was never meant to be safe or negotiated… or fatal,” which felt slightly uncomfortable to my #MeToo era ear).

And yet, Jeffrey asks questions that are both timeless and universal: What subjects are appropriate fodder for comedy? Is falling in love with another person, fully knowing that every relationship has a built-in expiration date, still worth the risk? Rudnick’s script can be a little preachy at times in providing the answer to that second question, but his characters have the right idea: “Life sucks, it always will, so why not make the most of it?” 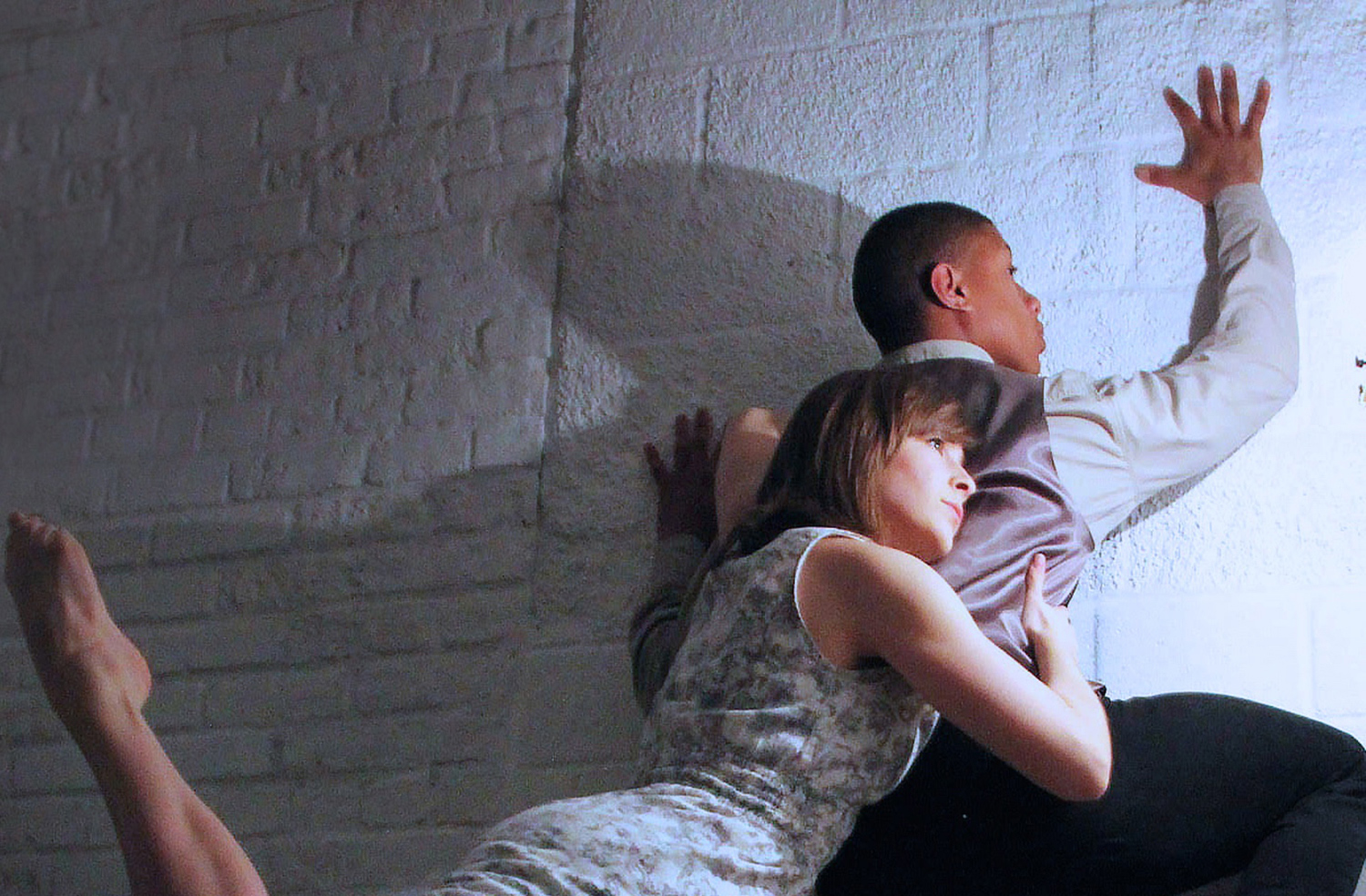