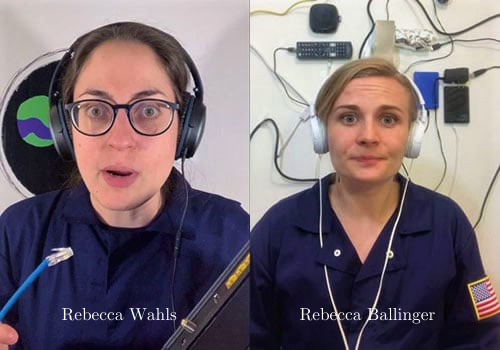 This article was first published May 22, 2020 in DC Theatre Scene here.

In the early days of regional stay-at-home orders, theatre artists Rebecca Ballinger and Rebecca Wahls were not ones to waste any time. They secured the equipment they would need: some quick decorations and the FaceTime app on their phones, and produced a series of very funny shorts.

A few weeks later, their 9 episode mini-series, Rebecca and Becca in Space, is available on YouTube for a quick binge (most episodes are under 5 minutes), another example of how local artists continue to produce work during the crisis.

The web series, set in 2033, features two astronauts stranded in space after the government pulls the plug on their research program. With no means of returning to Earth and isolated on their respective space stations, they do what any resilient astronauts would do: they live-steam their games of truth or dare.

“My favorite joke is when Rebecca’s character thinks everybody can shove their fist in their mouths,” Ballinger says during an interview with DC Theatre Scene, “and realizes it’s not true.”

“Watch till the end of the credits,” Wahls adds.

The script, written by both Ballinger and Wahls, started in 2019 and revisited this year, began from a simple premise.

“We wrote a number of sketches,” Wahls says. “Then we did a brainstorm exercise where we wrote a list of everything  we wanted to be when we grew up. And we both had ‘ASTRONAUT’ at the top of our list.”

The series is one of a number of projects funded by George Mason University’s College of Visual and Performing Arts’ Mason Arts At Home. Their program has been offering a series of live-streamed and recorded performances since early April.

For Ballinger and Wahls, the importance of producing the series helped add a much needed routine to their new normal.

“Honestly, those two hours really helped because we started filming this, like right when everything was shutting down and the stress was super high,” Ballinger says. “I could go sit on the floor of my closet [and film] for two hours every night. It really helped ground me in the normal of rehearsing and there was a structure.”

Ballinger and Wahls also hosted a live Q & A session, in character, after their show premiered. Ballinger recounts one of the submitted questions relating on how to deal with isolation in space.

“The most important lesson I have learned in space… It can be really hard to be by yourself all the time,” Wahls answered during the livestream, “If you can create ways to connect with other people, that can make all the difference. Even if you feel alone, you’re not alone.”

The series ends on a positive note, their “Christmas Special” (spoilers) suggesting a return home for the astronauts.

“When we were talking about this, before the pandemic happened, we were [considering] if at the end of this season we find out that we’re stuck forever? And then the next season, we’re like really dealing with an existential crisis,” Ballinger shares.

“We ended up knowing people didn’t want that right now. People want help. And so that’s why we wrote a Christmas special to wrap up the season, just to kind of give a little bit of light at the end of the tunnel to these characters.”

Rebecca Wahls is currently pursuing her MFA in directing at Carnegie Mellon University. Rebecca Ballinger remains in the DC area, and looks forward to her next performance with Monumental Theatre. 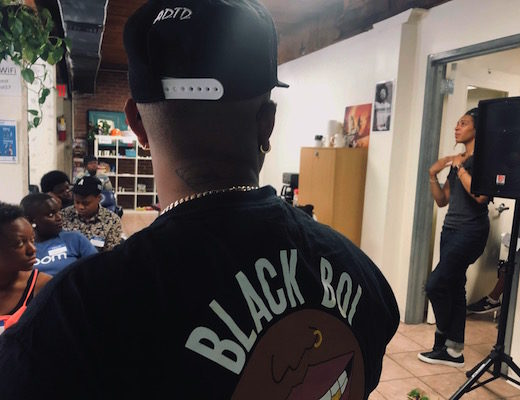