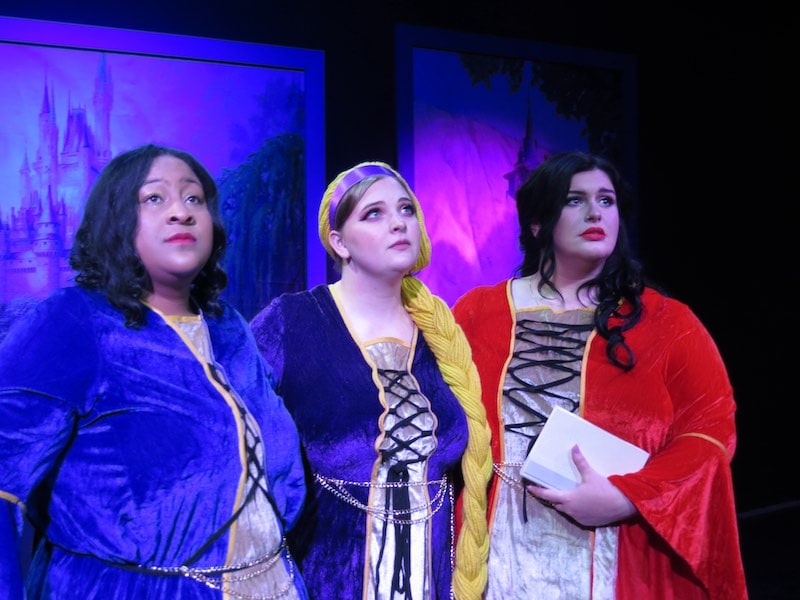 This article was first published in DC Metro Theater Arts on 11/29/22 here.

With their simple premises — a beautiful princess rescued from her wretched fate by a chivalrous prince — and often compelling narratives, fairytales have cemented themselves as a beloved staple in pop culture. And over time, many artists have challenged themselves to flip this formula on its head and defy expectations, often with amusing and charming results.

Rapunzarella White takes this challenge head-on in a uniquely charming fairytale adventure. The family musical by June Rachelson-Ospa and Daniel Neiden follows three classic fairytale princesses: Rapunzel, Cinderella, and Snow White. The three, now sisters, have been separated from one another and condemned to ill-conceived fates brought on by a curse at the hands of a wicked witch. Hijinks ensue in this fun family adventure progresses as the princesses await their fated princes to break their wretched curse.

Despite its unique premise, Rapunzarella White falls flat with its narrative. The musical’s story leans heavily into its fairytale roots and plays on every trope imaginable: wicked witches, curses, and the fan-favorite true love’s kiss. But rather than taking a unique approach to each of the above-mentioned fairytales, Rapunzarella White relies heavily on the cultural significance of these tales and never feels like it gets to tell a story of its own. The musical takes no real narrative risks and as a result feels like a disappointingly haphazard story born of an infinitely more compelling premise.

Make no mistake, the cast in the production at Best Medicine Rep is phenomenal. Under the fantastic direction of Jacqueline Youm, each cast member does an amazing job of bringing their respective roles to life, a respectable feat especially as most of the cast had to take on dual roles. Nathan Peterson’s Syd the Fairy Godbrother, Rebecca Heron’s Witch, and Carolina Tomasi’s Burly Bob were especially noteworthy as these characters felt the most unique and genuinely interesting throughout the performance.

In spite of the entertaining cast, though, there was simply not much to work with for the audience to resonate with. The one-note characters left much to be desired in terms of motivation, leaving adults in the audience struggling to connect with them.

The humor of the show similarly struggles. Throughout, the jokes are far from explicitly bad but rather consistently boring. There were a few chuckle-worthy moments, but as a whole, the show made no real effort to play around with its premise and expand on the humor that could have been born from this.

Where the show really shines is its musical elements. The roughly hour-long show is almost entirely composed of songs, and each is more charming and sonically pleasing than the last. Where the narrative and humor lack, the show more than makes up for it in music. The sisters’ rendition of “Woe Is Me” is incredibly touching and helps to truly contextualize their shared yearning to be rescued by a prince. “Razzle Dazzle ‘Em” and its reprise are upbeat and fun, leaving the audience genuinely entertained as Syd prepares Cinderella (Jessica Long) for the ball. Each member of the cast is also musically gifted, which shines through most in ensemble numbers like the final “Love Is All,” where their voices blend beautifully. Alongside the cast’s excellent musical delivery, the instrumental accompaniment, directed and arranged by Angela Small and Charles Czarnecki respectively, were phenomenal.

The overall technical aspects of this production of Rapunzarella White were also wholly entertaining. The brilliant lighting and sound design by John Morogiello elevated what was otherwise a simplistic set to something truly whimsical and straight out of a fairytale. These technical elements breathed a welcome breath of fresh air into the production.

In hindsight, Rapunzarella White struggled due to the limitations of family theater. It was clear throughout that many of the authors’ choices in the material, from its safe narrative to its simplistic characters, were only made to appeal to the younger end of the “all ages” spectrum. While this is understandable, the musical’s compelling premise and phenomenal cast could have thrived in a less restricted format.

Ultimately, Rapunzarella White does what it’s supposed to. Despite its flaws, the musical is still enjoyable in a general sense and able to fulfill its primary goal: to tell a story fit for the family, clichés and all. Although the show does nothing particularly interesting with its narrative or characters, it also doesn’t do anything so overtly poorly that it would dissuade all audiences from giving it a chance.