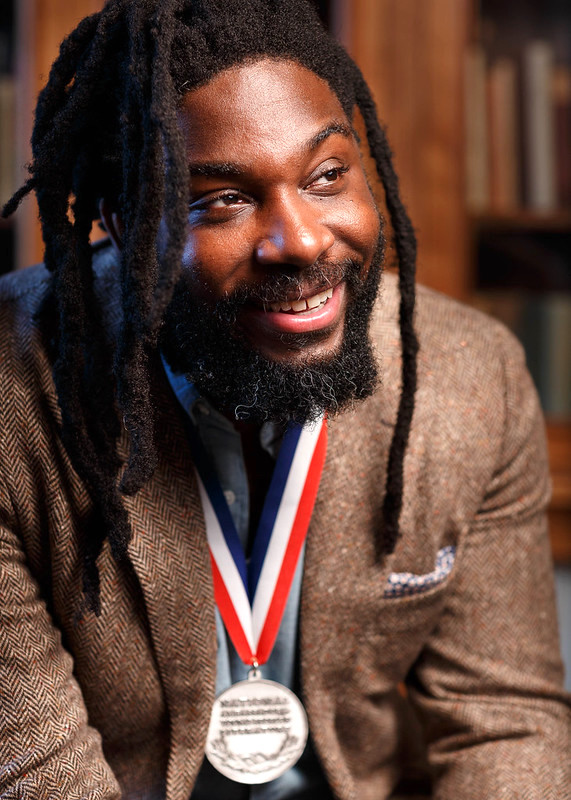 This article was first published January 27, 2020 in The DC Line here.

When Jason Reynolds was introduced earlier this month onstage at Coolidge Auditorium at the Library of Congress, a packed audience of middle and high school students from DC erupted into a standing ovation. Reynolds, in turn, assured them that their voices have the power “to knock the world off its axis.”

DC native Reynolds is the author of 13 books for young people, including his two most recent — Look Both Ways: A Tale Told in Ten Blocks and Miles Morales: Spider-Man (A Marvel YA Novel). On Jan. 16, Reynolds began a two-year term as the seventh National Ambassador for Young People’s Literature.

Reynolds, who started writing poetry at age 9, has also received a Newbery Honor, a Printz Honor, an NAACP Image Award, and multiple Coretta Scott King Book Award honors. In 2016, he was a National Book Award finalist for the book Ghost.

Reynolds graduated from Bishop McNamara High School in Prince George’s County, which honored the writer during the Library of Congress ceremony with a backpack gift delivered by student representatives.

The national ambassador is selected for his or her contributions to young people’s literature, the ability to relate to kids and teens, and dedication to fostering children’s literacy in all forms, according to a press release from the Library of Congress. The selection, made by the Librarian of Congress, is based on recommendations from an independent committee comprising educators, librarians, booksellers and children’s literature experts.

As National Ambassador for Young People’s Literature for 2020-21, Reynolds will visit small towns and cities across America to engage young people in meaningful discussions in groups large and small. He regularly talks about his own journey from reluctant reader to award-winning author, and he plans to redirect the position’s traditional focus by listening to students and empowering them to share their own thoughts and experiences. Reynolds calls his project “GRAB THE MIC: Tell Your Story.”

At the Jan. 16 event, Reynolds shared his experience of moving to and growing up in Oxon Hill, Maryland, after being born in DC. He recounted writing his first poem at age 9, reading his first novel from cover to cover at age 17, and his relationship with his mother, who attended the ceremony.

“The first thing she taught me to say was: ‘I can do anything.’ I had to say it every night before I went to bed. She drilled that into my head early in life,” Reynolds shared.

“This isn’t an award; this is a role, it’s a responsibility,” he said after receiving the medal. “And I’m going to make sure I do my very best to uphold it and make something of it.”

Reynolds intends to focus on outreach to rural areas and marginalized communities, recognizing their relative lack of access to library resources and opportunity.

In his speech to DC students, Reynolds relayed a tender story of a student who had once asked him to rap for the audience. Instead, he invited the young girl to come onstage.

“‘If you want me to put on a song and dance for you, come up here and see what’s like,’” Reynolds recalled saying. In the story, he gave the girl the microphone and said, “Here’s your chance.”

“Maybe it’s that young people don’t know yet what it feels like that their voices have power. That their voices can move and change a room, and shift the temperature and climate of a country and can literally knock the world off its axis. And maybe that’s because we as adults are not letting them know.”

His introductory speech as an ambassador was followed by an onstage interview with Librarian of Congress Carla Hayden. She asked about the idea that young boys typically “hated reading,” to which Reynolds described a world that limits the “idea of what a boy can be.”

When asked about his interest in working in rural areas across America, Reynolds reminded audience members who live in Washington of their proximity to institutions such as the Library of Congress and the largest museum system in the country. “I see young people who can’t come to the Library of Congress. I’ve been in one-stoplight towns where the closest hospital is an hour away.”

Reynolds is taking over from previous ambassador Jacqueline Woodson, best known for her young adult novel Miracle Boys and the Newbery Honor-winning titles Brown Girl Dreaming, Feathers, Show Way, and After Tupac and D Foster. Introducing Reynolds, she said the role of the ambassador is to connect with young people.

“[Our] role is to see people, and let you know how much you matter to us. We love you all so much, young people. You are going to save us. I’m sorry you have to save us,” Woodson said to a round of applause and laughter.

Woodson’s work will continue on at the Kennedy Center’s newly opened The REACH campus as a former ambassador of the readership program, which began in 2008. Authors who have held the position in the past have included Walter Dean Myers, Katerine Paterson and Gene Luen Yang.