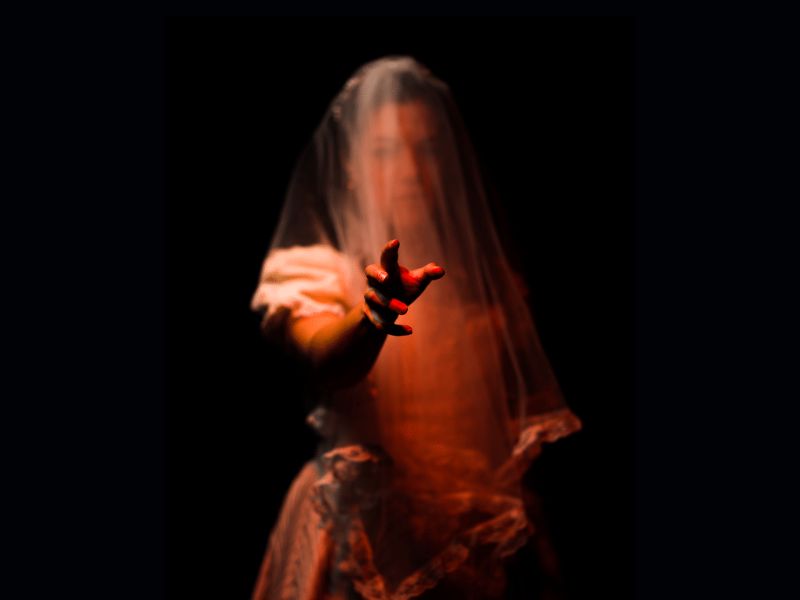 Who knew a scarf could be so many things?

Evidently, the directors of We Happy Few’s production of La Llorona do. The numerous scarves featured in the show are folded, knotted, bundled, and waved in a variety of ways throughout the show. They drape over the sets and stand in for weapons. They signify wealth and gender. And yes, of course, the scarves are also a symbol.

The use of fabric, though, is just one example of the creative staging on display in the premiere production of La Llorona, written by local playwright and actor Gabby Wolfe and now performing at Capitol Hill Arts Workshop.

The story of La Llorona ⁠⁠— which literally translates to “the wailing/weeping woman” ⁠— is not new. It is based on an oral story that has been passed down for centuries throughout Latin America and is pervasive throughout the culture there. It is a tale told at bedtime, a warning for children, a ghost story ⁠— I saw the production on Halloween, which was fitting. It is a staple of Spanish-speaking popular culture but has never managed to break through American culture more broadly.

Wolfe intends to change that with this production, at least on a local scale. Her version of La Llorona was first presented as a staged reading last year as part of We Happy Few’s “Expanding the Canon” initiative, which aims to shed light on classic stories and works by minority and non-Western artists.

To tell this story, Wolfe has expanded the original tale to a more fleshed-out narrative. This La Llorona now centers around the story of Esperanza (played by Wolfe), a seamstress in a small town in Latin America who is swept off her feet by Don Hernan (Victor Salinas), the heir to the local mining operation who has moved there from Spain. They fall in love quickly, but differences in class, ethnicity, and gender threaten to tear them apart. The story quickly turns more tragic than romantic.

After all, this is a ghost story, not a love story. That much is clear from the beginning.

Wolfe bookends the story of Esperanza with a present-day conflict between mother and daughter. It’s a smart storytelling technique that links the folktale of “La Llorona” to the present day, an important connection to make since audiences here are likely not aware of how well-known the story still is today throughout much of Latin America.

And yet, this connection could also have benefitted from deeper exploration. As with any oral story that is passed down for centuries, there is an overarching question here: Why has this story remained pervasive for so long?

There’s room in this play to explore more of what “La Llorona” can and can’t tell us about Latin American identity (or more specific sub-regional identities) today. After all, understanding the stories that shape cultures helps us understand those cultures, and I’d be interested to hear more of Wolfe’s perspective on that through this play.

Still, as presented, La Llorona works well for a theatre company like We Happy Few, which specializes in stripped-down, imaginative stagings. This production is no exception.

The three-person directing team of Rachel Dixon, Esteban Marmolejo-Suarez, and Kerry McGee has utilized a small space to its fullest, turning a tiny blackbox into an intimate thrust stage that gives the production a gathered-around-a-bonfire feel, as if you’re seeing a late-night ghost story come to life before your eyes.

The use of fabric only adds to that, and gives the production a spooky air. Cloth makes up almost the entirety of the haunting scenery by Megan Holden and versatile costumes ⁠— the ensemble cast switches out scarves to differentiate the dozens of characters ⁠— by Sabrina Simmons.

The cloth and scarves also successfully give the show a simultaneous cultural specificity and symbolic universality: Esperanza is both one woman and every woman as her story is passed down from her time to our time.

And therein lies the thematic heart of Wolfe’s work. La Llorona is a ghost story, yes, but the monster we see is haunted just as much as she haunts ⁠— and that feeling will sit with you long after it scares you. 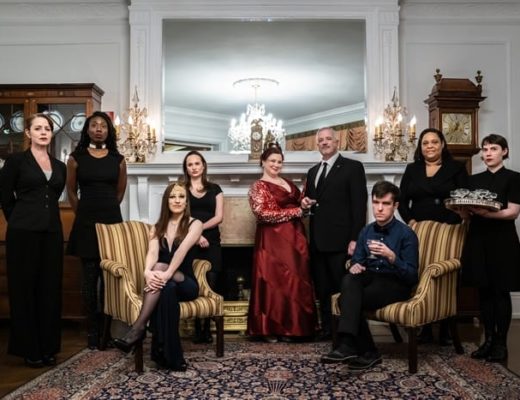 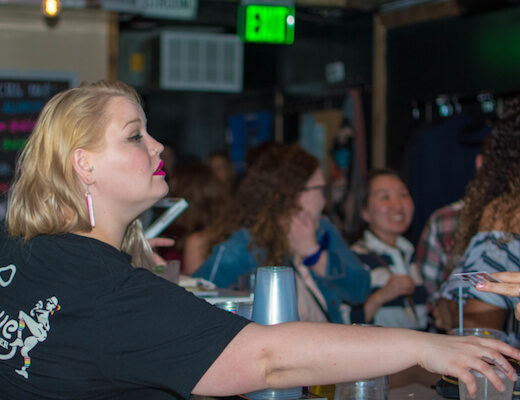